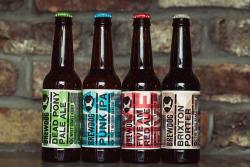 Craft beer BrewDog and Scottish pop-up Dram & Smoke are teaming up on the 5th April to offer an Easter Sunday lunch with a hoppy twist. Hosted at BrewDog’s eponymous Shepherd’s Bush bar, as part of the £35 ticket guests will receive six courses of Scottish fare paired with a tipple chosen by BrewDog’s resident beer experts to perfectly complement each dish. Things kick off at 12pm with all guests dining at the same time and the beer geeks out there will have the BrewDog crew on hand to chat through all the pairings on the day.

Hot on the heels of a sold out winter project in a leather tannery warehouse in London Bridge, the Dram & Smoke lads will be dishing out typically tongue-in-cheek Highland classics. Yes, that does mean that the oft-maligned deep-fried Mars Bar gets a look-in when dessert rolls around. Ã¢â‚¬Å“So wrong but oh so very right. We promise to convert you on this oneÃ¢â‚¬Â says Head Chef, Nick. Their whisky barrel smoker takes centre stage in creating the other dishes on the seasonal tasting menu and, although you won’t find the traditional chocolate Easter bunnies here, Little Bunny Foo Foo does make a brief appearance albeit after being braised in Punk IPA for four hours and served on a tattie scone. As usual with D&S some of the courses will be served up family-style and the menu will focus on bigging up the best of Scottish produce in the company of the best beer going.

From the heavily hopped Hardcore IPA to the dark and brooding Cocoa Psycho and everything in between, guests can expect a tour along the beer spectrum during this one-day event. BrewDog Southern Commander Martin Keith says Ã¢â‚¬Å“pairing craft beer with top-notch food is something we are incredibly passionate about. We believe the diversity in beer styles provides huge scope for elevating food.Ã¢â‚¬Â

An Easter bonus comes in the form of’Beer Bingo’ – guess the food and beer pairings correctly before the meal begins and guests will be in with the chance of winning some Easter goodies including tickets to the next Dram & Smoke pop-up project. Definitely one for those with a competitive spirit.

And that’s not to mention the vintage arcade games and pinball machines dotted around the bar that are always a bonus for a chilled Sunday hangout. Post-meal there’s definitely reason for guests to stick around too. Forty of them to be precise – that’s how many taps there are behind the bar dispelling not only BrewDog’s finest but also a selection of guest beers from craft brewers around the world.