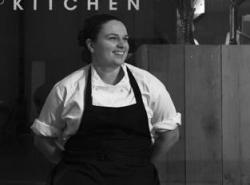 Following on from the success of James Cornwall’s recent takeover at Opera Tavern, The Salt Yard Group will be welcoming upcoming chef, Selin Kiazim to Ember Yard on the 4th August.

Selin (Peter Gordon protÃƒÂ©gÃƒÂ© of Providores and Kopapa) who specialises in Turkish and Middle Eastern cuisine, with an emphasis on grilling over charcoal, will be serving a selection of tapas-sized dishes alongside the existing Ember Yard menu.

Guests will be treated to dishes such as: Ã…Å¾eftali kebab-spiced lamb crepinette with lemon and lavash; chicken livers with cumin, rosemary and date butter on toast; Baharat marinated cuttlefish, sea vegetables, peas and sesame; and BBQ peach, pistachio and ricotta kÃƒÂ¼nefe and fennel seed ice cream.

Selin Kiazim developed her love of cooking at an early age. She completed with distinction her Professional Chef’s Diploma at Westminster Kingsway College in 2008 before starting work with acclaimed chef Peter Gordon at The Providores, Marylebone and later becoming head-chef at Kopapa, Covent Garden. More recently, Selin was resident chef at Trip Kitchen & Bar, receiving critical acclaim for her food.

Selin’s food takes inspiration from her Turkish Cypriot heritage and is focussed around communal eating. Selin has been cited as London’s next hot chef, and has recently been featured in The Independent and The Times. Her style of cooking marries perfectly with that of Ember Yard, with a heavy focus on grill cooking and incorporating the intense smokey flavours that develop from cooking over charcoal.