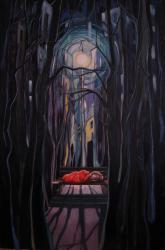 Lately, I fell into (and fast out of) the habit of accepting arbitrary invitations. Ghastly and good, two recent RSVPs concerned elevated venues – in opinion and altitude…

On Burns’ night, I scraped the sky at Centrepoint’s Paramount Club. Excepting the astonishing view, my abiding memory is of thick queues of boozy-floozies pressing towards the copper bar. Their goal (and in desperation, I admit mine), to down the sponsor’s gratis cocktails. Made from a base of ‘Monkey Shoulder’, I considered the mixologists effective camouflage of the vanillin, peaty, lively blend an affront to the Scotch. Outdoing the drink, its website has more spirit than the spirit, being infuriatingly populated by pixellated primates. The best part of the evening? -Pressing ‘G’ in the lift soon after an unconvincing ode to an absentee orb of sheeps pluck.

Taking refuge from rain later that week, I was almost struck by the outwardly sprung door of another lift. Ascending in the see-through cubicle to floor four of The Ivy’s club, where obnoxiously affluent celebrities ‘cling together’ like the creeper, I soon became sedated by the beaker of squashy, icy punch pressed into my palm. Alas, for the first hour of my visit, I genuinely had no idea why I was there. But unlike Paramount, it turned out to be an engaging evening.

The occasion: results day for an art competition launched by Artrepublic, online/offline stockists of exclusive prints. From 250 entrants, four finalists were competing for exposure via charity, ‘Streetsmart’. Founded in 1998, the organisation seeks to convert the additional £1 levied on participating restaurants bills in November/December into fodder for tummies of the hungry homeless. Since it was launched in 1998, it has come close to raising £4m. Stirling work, but with short ambitions? -There are, after all, 12 months in a year.

Ensuing a gutsy film about the artists, sadly obscured from my vision by the big hair experiments of a lanky audience, then the stern silence of anticipation, the judge’s decision was read. The winner: Grant Dejonge’s emotive figure of a sleeping child on a park bench, amongst an ominous thicket. The self-taught Dejonge, who lives with his wife and two children in Plumpton, Sussex, accepted the award with an emphatic ‘f****** thank you’. His work will now be replicated large on building canvases in Covent Garden and Brighton, visible to those suffering as its subject matter. Of those others short-listed, the stark, ghostly figure of a ‘Sleeper’ on brick by artist, ‘Stik’ was sensuously powerful.

Coincidentally, there is a relationship between rough sleepers way below the tall tower on Tottenham Court Road, with its VIP members only, Paramount Club. In January 1974 (36 years ago), homeless campaigners successfully occupied the building, keen to highlight how its vacant floors could ease the capital’s housing crisis. It must have seemed hard for all but the most heartless to refute their plea. In pursuit of a single tenant, its reclusive millionaire developer, Harry Hyams infamously deliberately kept the 32-storey building utterly untenanted for years. And even today, at least one floor remains free…