Launched by two friends and enthusiastic home cooks, Tina Michelucci and Deborah Pyner, ‘Sweet Freedom’ was conceived as a liberating alternative to white menace, sugar. A recent recipient of a Great Taste Award gold medal, it represents the first sweetener to receive such an accolade. Douglas Blyde meets its makers…

Describe the taste, texture and weight of Sweet Freedom?

Thinner than honey, but thicker than maple syrup. The original Sweet Freedom Sweetener tastes just like sugar whereas the Syrup is darker. When warmed it becomes much stickier and can bind flapjacks, cookies and granola. 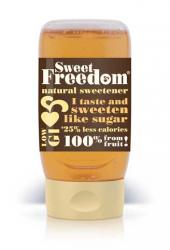 Can you spin sugar shapes from it?

What is your back-story?

Why did you invent it?

Tina has an underactive thyroid and Deborah’s husband is diabetic. Neither of us were happy using artificial alternatives, so we took it into our hands to develop our very own naturally sweetening alternative. That was three years ago – fast-forward to 2009, and we’ve now been shortlisted for the O2 Entrepreneur of the Year Awards!

What makes it healthy?

It has 25% fewer calories than sugar and gram for gram, you can use 50% less. It is made entirely from apples, grapes and carob fruit carefully sourced from Europe, is gluten free, and miles away from genetic modification. It also has a low Glycaemic Load and is diabetic-friendly. Unlike other sweeteners and syrups, instead of chemicals or enzymes, we use water to extract the vital parts

Which country has approached it with the most enthusiasm?

Britain, so far – our launch market October. We have since begun exports to Europe and the United Arab Emirates, with the first batches bound for the US later this year.

Have you considered proposing it to education authorities and hospitals?

A good roster of schools, nurseries and hospital cafes have already embraced it, in no small part due to its safety for small kids where, believe it or not, honey could pose a problem. And because it offers a sustained energy release rather than the highs and lows of sugar, we have found ourselves in talks with the Ministry of Defence…

Who devised the name, ‘Sweet Freedom’?

After much deliberation, it was the clear favourite with friends, family and foodie contacts, so – forgive the pun – it stuck. It suggests freedom to indulge in a little ‘sweet pleasure’ without the pain of guilt.

What is its most striking ingredient?

The carob pod, which grows on trees and has been cultivated in the Mediterranean for over 4,000 years – a prime source of natural sweetness.

What are the biggest weight losses recorded under its influence?

-Place the coconut oil and Sweet Freedom in a large pan and melt over a low heat.

-When the mixture is completely melted, add the oats, pumpkin seeds and ginger and mix together really well.

-Pour into the prepared tin, press down and smooth over the top so it is level.

-Bake for 25mins until golden.

-Remove from the oven then mark out where you will cut before leaving to cool in the tin.

-Remove from the tin when cold and place in an air-tight container.

You can find Sweet Freedom at Kensington Whole Foods, Fresh & Wild, Planet Organic, larger Tescos, and as of 5th October, Waitrose. (£2.99 for 300ml). Or try winning a jar here