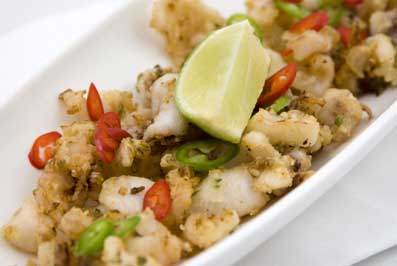 Newly opened Marylebone restaurant, Trishna, puts its own spin on the time-honoured tradition of curry and a beer, so beloved of the British Indian food fan, with its new beer and food menu.

Available at both lunch and dinner, the five-course menu costs £42 and is a delicious riposte to those who think the only match for spicy Indian cuisine is a pint of lager. Trained sommelier-turned-Trishna general manager, Leo Kiem, has found a selection of beers that show off the beautiful modern Indian cooking coming from Trishna’s kitchen yet which never overpower the subtle spicing and delicate British Isles seafood that is chef Ravi Deulkar’s hallmark.

Observes Leo Kiem, ‘There’s a common misconception that Indian food is impossible to match with anything other than a pint of lager. Not only that, there’s also a sense that beer isn’t somehow good enough for a fine-dining restaurant. I’ve had a lot of fun finding some beautiful beers to go with the menu at Trishna that should knock both those myths on the head!”

Beers from all over the world appear on the menu including Edinburgh brewery Innis & Gunn’s oak-aged beer, Mexican dark beer Negro Modelo and Monteith lager from New Zealand. All have completely different flavour profiles, are produced within very different brewing traditions, and work to enhance the cuisine at Trishna in their own unique way. The ‘house’ beer, traditionalists will be pleased to note, is India’s own Cobra beer. Trishna also lists King Cobra.

The menu can be taken as a ‘tasting menu’ of sorts – each dish paired to a matching beer by the glass and is available for a minimum of two people. There’s also an extensive range of wines, both New and Old World available by the 125ml glass or 250ml carafe.

Trishna London is the London outpost of iconic Mumbai seafood restaurant, Trishna. It opened last month on Blandford Street in the heart of London’s Marylebone Village. Trishna London, in common with the Mumbai original, offer a modern take on the traditional coastal cuisine of south west India only here produced from seafood native to UK shores from high quality, sustainable sources on the Cornish, Dorset and Scottish coasts.