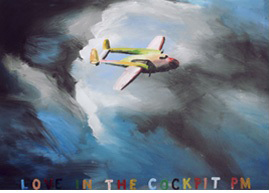 There’s something different at Mews in Mayfair. They are are opening the shop next door as an Art Gallery during April. There will also be a number of pictures hung around the restaurant, bar and lounge for the duration of the show. If it’s as successful as they hope they will be doing further collaborations and also using the space as a mini function room for champagne receptions and canapé parties up to 50 people. The first show is in association with the comedian Vic Reeves and the online art gallery Eyestorm. www.whereeaglestremble.com

‘Where Eagles Tremble’, features a new series of paintings that illustrate a fictional story written by Reeves about enigmatic film actor Alan Todd, who makes aviation films featuring WWII airplanes. Surreal and humorous like his comedy, Reeves’ new works are beautifully crafted and sublimely absurd, and once again prove that he is not just a comedy genius but a serious visual artist who will take you to another dimension with his perplexing imagination.