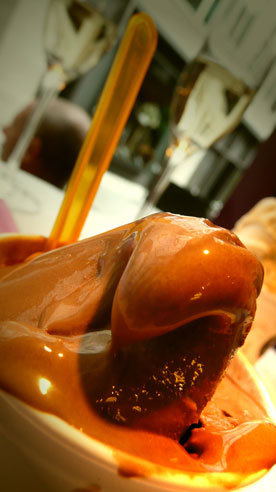 I often wonder whether I will ever redeem the cost of my education. In a lean moment, having being rejected by John Lewis’ lighting department, I resorted to handing my heat-bound C.V. to a similarly dejected-looking ice cream vendor in central Milton Keynes. I never heard more, which was deeply unflattering. I have, I suppose, always harboured an interest in matters soft scoop, probably because of my Italian mother. Although New Zealanders are supposed to eat the most, Italians consider good gelati a birthright. In my TV production days, I even pitched a profile on Rhyl legend ‘Degsy’, then ‘mobiler of the year’. I kid you not, his van bears the prose: ‘Forget the rest – lick the best’ and ‘Don’t Skid on a Kid’. There’s sage advice within those catchy rhymes…

The rain then did little to dampen my spirits for the launch of ‘Freggo’, a Mayfair parlour in receipt of some 7000kgs of frozen Argentina. Timely for our heat-wave. Bedecked in purple, marble and mirrors and brought to you by ‘Gaucho’ it represents the first U.K. outlet of the South American staple, known there as ‘Freddo’. The future was licked four decades ago when an exotic fruiterer in Buenos Aires thought to save over-ripe stock by churning it into ice cream.

Apparently the traditional way to serve it is high upon (rather than in) the cone, which takes practice. Having walked past the day before, I spied a fair few accidents meet the Swallow Street pavement. From the safety of a tub, I enjoyed grainy chocolate, which tasted slightly savoury with a suggestion of ‘Ex-Lax’ (which from memory tastes good). My friend was so moved by her generously fruity Banana Split that she said it ‘went deeper than licking.’ Goodness me. After two each (that’s 300g), not to mention curdling, celebratory flutes of Champagne, we laid down our plastic spoons and conceded victory. These are wonderful ice creams, but dense nonetheless.

I plan to return to sample other decadent flavours like Malbec and Berries and of course Dulce de Leche, the sweetened milk beloved by any Argentinean with a tongue.