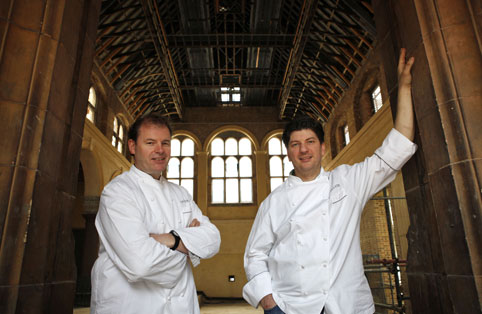 Plenty of foodies like to worship at the feet of chefs, now they can do it in a place with the right odour of sanctity.

Defying the recession, or maybe just too far down the contract road to stop, Chris and Jeff Galvin have announced that the name of their forthcoming City of London restaurant will be Galvin La Chapelle

Scheduled to launch in late autumn 2009, Galvin La Chapelle will be the brothers’ third restaurant opening in London, after Galvin Bistrot de Luxe and Galvin at Windows and will be based in the 19th century grade II listed St Botolph’ Hall in Spital Square, between Bishopsgate and Commercial Street.

Chris Galvin explained the choice of the restaurant name: ‘We had noticed that wines from the Rhone Valley had a particular resonance with our cooking, and on visiting the area we were treated to a bottle of La Chapelle, and a very special tour of the Paul Jaboulet caves.’

‘We travelled to a small chapel which rests upon the hilltop vineyard of Hermitage, and the whole experience had a big impact on us; the beauty of the Rhone Valley; the heritage of its winemaking tradition and of course the spectacular quality of the wine itself. We felt a connection and wanted to bring this to our new restaurant and share it with others.’

Galvin La Chapelle will comprise three dining areas – a fine dining restaurant based in the main hall, a cocktail bar in the old Curate’s House and an all day café de-Luxe with outdoor seating leading on to Spital Square.

This latest addition to the Galvin’s restaurant empire is a decidedly family affair. Chris and Jeff Galvin head the team as Chef Patrons; they will be joined by Chris’ wife, Sara as Patron and host; and their brother, David, who will source ingredients; as well as Chris’ son, Emile as site technician. This core team will be supported by Spero Panagakis as General Manager and Chris Warwick as head chef, who have both worked with the Galvins for a number of years.

With the City boys shouting BAB (Bonuses Are Back) while the rest of the country takes semi-voluntary pay cuts, it could be that the Galvins are in the best location in London, with the cafe aspect luring in nearby young British artists on tighter budgets.