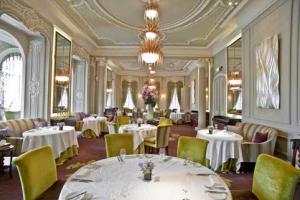 The Milroy restaurant, is at No.5 Hamilton Place. Previously it was a bit select, only members of Les Ambassadeurs Club got in, but now The Milroy isalso be open to non-members for lunch. It’s a rare chance to experience a part of London’s oldest private members club.

Built in 1810, 5 Hamilton Place stands on the site of one of Henry VIII’s hunting lodges, and has belonged to some of England’s most distinguished families including the Marquis Conyngham and Rothschild families. The building has been home to various ventures among them The Milroy nightclub, of which Princess Margaret is said to have been a regular, The Garrison Club, and Cercle.

Leopold de Rothschild extravagantly remodelled No 5 Hamilton Place in the late 1870s. The overall style was heavily influenced by fin-de-siècle Louis XV, and the current owners have worked closely with English Heritage to preserve the unique interiors. Features include Rinaldo Barbetti’s hand carved library and staircase, which are now the entrance hall and bar for The Milroy restaurant, and took 14 years to complete.

The 64 cover restaurant was designed by Nicholas Hollinshead Interiors. Decorated in shades of lime white, taupe and cream it retains many original features including; Murano glass chandeliers, a decorative Georgian ceiling and a magnificent internal marble colonnade which leads onto terraces, with views over Hyde Park. The dining chairs, upholstered in coffee and lime velvet were designed by William Yeoward.

The Milroy also has a private dining room, The Leopold Room. Previously used by members of the Royal family, the Royal Box is decorated with hand painted DeGournay scenic paper, extravagant damask curtains and has seating for eight guests.

Ludovic Bargibant is the Restaurant manager, and was previously manager at Rhodes 24. He will be assisted by Andres Lucas, the sommelier, who will oversee the extensive wine list. The international list will feature over 200 bins, with 10 available by the glass from £7.50, and bottles starting from £22.00.