still there.Ã¢â‚¬Â We look out from the terrace at the culprit, snow-capped and beautiful, Etna’s slopes peter into Catania’s gentle foothills and the broad plains of the Messina Strait. From this distance the mount looks serene and innocent, like you could nestle a cherry in the dimple of its frosted summit; it’s only as dusk darkens the rock face to an iconic silhouette that you sense a raw potency.

Surrounded by ancient groves of cypress, almond and sweet orange blossom, Hotel Grand Timeo sits high in the hills of Sicily’s east coast on a plateau overlooking the bay of Taormina. Adjacent to the hotel, a Greco-Roman theatre nestles into the cliff, the blue Ionian Sea visible through its crumbling columns. It’s part of a landscape so improbably picturesque, that when the Prussia Otto Gelling painted a series of watercolours depicting a town with a smouldering volcano in the background and an ancient theatre at the fore, his critics thought he’d gone on a flight of fancy Ã¢â‚¬â€œthat’s until they came to see for themselves, bringing the first ripples of tourism to Taormina.

Then just a modest villa with eight rooms, the Timeo quickly evolved to accommodate Europe’s aristocratic literati during the last decade of the belle ÃƒÂ©poque. Tennessee Williams, John Cocteau and Truman Capote all stayed the Timeo, as did DH Lawrence who lived here for four years while penning Lady Chatterley’s Lover, and Guy de Maupassant, who famously said of Taormina: Ã¢â‚¬Å“It is only a landscape, but a landscape where you seem to find everything on earth to seduce the eyes, the spirit and the imagination.Ã¢â‚¬Â  By the 1950’s celebrities from the worlds of cinema, music and theatre had joined the nightly gatherings on the famous literary terrace, where they would mingle and sip cocktails as the sun dipped low in the sky and the smell of jasmine and hibiscus lingered in the warm dusk.

This year the hotel celebrates 140 years of hospitality; recently refurbished in high baroque style, the Timeo is just as beautiful and imposing as it ever was. My junior suite boasts bags of old-style glamour, a marble bathroom at each end and views of the sea and mountains beyond; while the balcony overlooks the infinity pool and the colourful gardens that wind down to meet 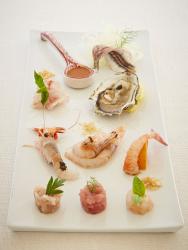 the tiny cobbled lanes of the Borgo Medievale, the oldest past of town where artisan craftsmen trade unusual handmade goods. Taormina itself is full of designer shops and stylish shoppers, but back at the Timeo time hovers around the early part of the last century, so that Hercule Poirot himself wouldn’t look out of place wandering among the plush velvets and polished wood floors.

With evening views over the twinkling bay, the 60-seater restaurant serves Nuevo Sicilian cuisine while music from the grand piano burbles relaxing classics in the background. Head chef Roberto Toro trained in Germany, but his preference is for the traditional food of his native Sicily cooked to fine dining standards.

As you’d expect from an Island, seafood is celebrated on most menus, and crudo, the Italian version of sashimi, is one of the most popular ways to eat it. Raw tuna and sea-bass Carpaccio in citrus marinade is a plate of fresh flavours and soft, silky textures, contrasted with a delicate and crunchy strip of smoked black bread, while a starter of zucchini flowers filled with goats cheese ricotta brings crisp pods filled with the mild and milky cheese, loved by Sicilians for its richness and versatility.

The pasta course delivers two quintessentially Sicilian dishes; Pasta alla Norma hails from Catania on the east coast and is one of the island’s most iconic dishes. The simple sauce uses little more than fresh tomatoes and fried egg plant, sometimes with a little crumbled chilli or garlic, but the superior quality of these seasonal ingredients elevates even the most basic versions to a sumptuous dish that’s all about the perfect balance of sugar and acid Ã¢â‚¬â€œas with classic Sicilia 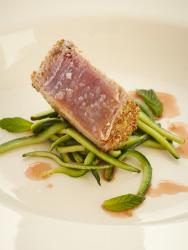 n caponata, a mixture of the same ingredients that’s used to top bruschetta.

The Timeo’s Pasta alla Norma uses super sweet tomatoes, a little basil on the side and a scattering of the piquant ricotta salata. The maÃƒÂ®tre D’ tell us that this is his favourite pasta dish, the one that he makes regularly at home, and he also gives us a taste of ricotta infornata; milder and milkier than the salty salata, infornata is produced by baking the soft cheese in the oven until it develops a lightly charred crust on the outside and a pale coffee colour within.

The second’national dish’ of Sicily is a fat spaghetti with a dry sauce of anchovies, pine nuts, raisins, and crunchy fried  bread crumbs Ã¢â‚¬â€œfishy and punchy, it’s the humble anchovy and its rich oils that make for a flavoursome salty-sweet mouthful.

For mains I take the roast suckling pig which comes in melting chunks with a soft disk of truffled potato fondant and a fruit infused meat jus. Rose pink beef is served with dinky tempura vegetables and a trio of sauces, including a balsamic reduction and a creamy mustard sauce with enough kick to add husky savour to the beef. Simple and precise cooking emphasises the quality of the meat here, and for the most part Sicilians prefer purity of flavour uncomplicated by too many herbs and spices.

For desert there’s a selection of miniatures including a frozen pistachio parfait and a tiny crisp cannoli filled with sweetened ricotta Ã¢â‚¬â€œa sticky ending for sure, but mercifully light after three courses.

Along with the Archineri Etna Rosso, a lush medium bodied red with notes of cherry, red apple and cedar, we also try a glass of Moscato di Noto, a lovely dessert wine from the Planeta winery made with with grapes from the north-eastern province of Syracuse; light with soft honey, date and apricot flavours, I’d happily drink this any day of the week. Much more of a viscous liquid dessert is the Ben RyeÃ¢â‚¬Ëœ Passito di Pantelleria Donnafugata Marsala, lush and raisiny amber nectar with hints of tobacco and orange peel. 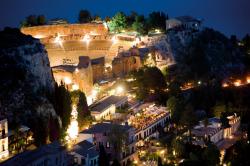 A rare cigarette on the terrace and it’s time to contemplate the undeniable magic. Like the stately homes of Europe, many of these grand old edifices of have fallen to into disrepair, but the Timeo is no such relic. Having survived the bombing of Taormina in ’43 and an earthquake in ’68, the Timeo saw in the 70’s with a new clientele of rock stars, while Etna famously erupted smoke rings in the background.

Surrounded by a landscape of natural drama the hotel is a gracious addition that’s less formidable than you might think; despite the grandeur and the illustrious guest list, the Timeo, once acclimatised to, is supremely comfortable and reassuring. From high up on this rocky plateau the world looks beautiful, and perhaps one of the best things about holidaying is remembering that indeed it is.