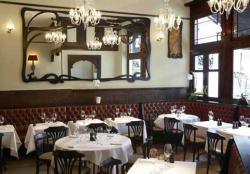 The sight of a man eating alone in a restaurant is reassuring, one you tend to see only in French restaurants. A good French place is where the lone diner never feels like a sad loner; just someone having a meal. The staff treat him perfectly normally and chat cheerfully, knowing just how long to linger before letting him get on with his grub.

There are two single diners in Angelus when J and I come  in from out of a wet and windy night. Just a few hundred yards from Lancaster Gate tube, this restaurant created from a venerable old pub is cosily welcoming in a Brasserie stylee. A sense of cheerful informality but with steady professional staff at the tiller. The tables are close together, which is another good sign; I actually  like a Brasserie where you can have next door’s conversation as a backdrop and their elbows in your soup.

It’s Angelus’s birthday apparently; five years old and going very strong, and so they have a menu of revisited classics as well as dishes that the locals, and this is a very local restaurant, like to eat repeatedly. This is enough to tempt me out west.

It’s classic stuff. A starter of duck’s liver brulee is something you might find in the quack-obsessed Gascony region, or in Bordeaux’s brilliant La Tupina. The glaze of sugar shatters to reveal smooth, rich, cardiac-arrest klaxon creamed livers ready to be shovelled heavily onto fine bread studded with nuts. It’s as gorgeous as only something so simple can be. A glass of Pacherenc, so much nicer than Sauternes in my book, proves just the ticket to go with it.

J has a twice baked smoked haddock soufflÃƒÂ© with braised leeks and grain mustard veloutÃƒÂ©. It’s the kind of thing you used to find on bistro menus all over France but now, as so many succumb to shortcuts and the microwave, it tends to crop up only in Paris or Lyons. It’s fluffy and dense with flavour, the grain mustard keeping a loose lid on the richness.

Stone bass is not sea bass, it’s a Perchy kind of fish, the sort the French seem to value far more than we do. Here it’s given a proper searing to deliver a golden crunchy skin that contrasts with the risotto beneath, a risotto that is cooked very well. But this is a French restaurant, right?’We do have an Italian working in the kitchen too,’ answers the maÃƒÂ®treÃ¢â‚¬Ëœd when I quiz him.

I like the crunch of the pieces of raw spring onions dotted about in decent sized bits, as well as the chorizo which slowly leaches its pungent oil into the rice and over the baby artichokes It’s what used to be called hearty food, food which would write off an afternoon if eaten at lunch. It’s very much what I enjoy eating still, but boy does it weigh heavy. Sommelier choice wines by the glass continue to help it descend very well though.

J is not sure about his Glazed fillets of Cornish lemon sole Veronique with fennel and new potatoes. We’d both forgotten that Veronique is an old Escoffier dish and thus heavy with cream as was the style back then. It’s quite a bruiser of a dish, the sauce mugging the defenceless sole and stealing it’s iPhone. Tasty but oof, a lot to get down.

J throws in the napkin, weakly asking only for some ice cream to end with while I spy classic Grand Marnier soufflÃƒÂ© and after the requisite wait it arrives, properly wobbly and tall to table. Not enough chefs today will risk a soufflÃƒÂ©, too much showing their grill-only skillz up, only the good ones with classical training. It is I think a tad undercooked in the centre and I can’t taste the Grand Marnier, or indeed smell it, but I enjoy it for its Proustian kick of days gone by.

This Angelus birthday menu is one deliberately rooted in the past and only on for a short while. Its classic style makes it heavier than perhaps most of us can handle nowadays, but as a one off treat it’s a very good’un. Angelus’s normal dishes are still on, and the veal with beans looked and smelled gorgeous as it went by as did a partridge en croute, but for a taste of what we ate not so long ago this birthday menu is a gut-busting delicious treat.