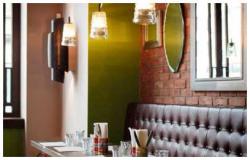 Haymarket is a not a road that I stroll down very often but then who does? It’s more like a motorway with its one-way traffic hurtling down and the buses bellowing that jet engine noise that all old Volvo buses seem to make. Yes I am such a nerd I have actually made a point of noting the manufacturer.

Crossing the road is life threatening, so it’s as well that Haymarket is lined with restaurants on both sides. And what a lot of restaurants there are. Well-known chains, all catering to the Croydon crowd come up West for the night. I can slander Croydon like this because I was born and lived there until I was 16, so I know of what I slag.

New kid on the strip is Assaggetti inside what was once a banking hall. Like all the restaurants down Haymarket it’s unashamedly aiming for the tourists and evening theatre crowd and has no pretensions to be hip, or to be a ‘special date’ place. The emphasis is on plenty of tables, low cost and speed.

The concept, if one can call it that, is the same as that High Temple of Trendiness, Polpo, but with less tattoos obviously. Small plates, ‘ideal for sharing’ and all that guff. Nothing wrong with that, it’s just becoming a bit ubiquitous and can be a cover for mean portions at high prices. And talking of Polpo, Assaggetti’s menu is a dead ringer for Polpo’s – same paper, same font if not the same dishes. Coincidence?

Anyway, Assaggetti is not going to compete with Polpo and it’s not trying. You have to take it for what it is and my take is that they are doing it pretty well. A bright and cheerful room with well-spaced tables, smart design touches and while a bit ‘corporate’ not off putting. It certainly wasn’t putting off customers who were steadily flowing in and out.

You get noticed fast on arrival, you get seated swiftly and with a smile. Tourists and Croydon boys like that kind of thing, especially with theatre tickets in their pockets and curtain up soon. The menu, with plenty of affordable choice, is also the tablemat, which is handy and the waiter is quick to offer explanations. Basically you order what you fancy, it will come out randomly from the kitchen, and if you want more, then ask.

So some Burrata was fresh, nicely wet inside. I’ve had better but I’ve paid a lot more. The sliced tomatoes with it were Dutch though, all crunch and no flavour. I’d pay extra for a dish that used proper red ripe ones. The meatballs were okay, well seasoned and the tomato sauce possibly tinned tomatoes but, hey, tinned are better than Dutch any day.

Beef Carpaccio was decent for the money, a bit too heavy on the truffle oil, a dangerous ingredient in the wrong hands. It gives the illusion of class, but is a bit suburban. I have a bottle at home. We liked the Pizzettine a lot though; a good base scattered with nuggets of spicy Tuscan sausage and, at £4.00, a pop good value too.

Fried shards of Courgette were crisp and freshly fried and could be eaten by the handful, which we did. A tad salty but just inside the envelope, while the fried squid were small rings, which was a good sign, and the batter crisp enough to suggest they were made in the kitchen and not shipped in from Brake Bros. Plenty of ‘tartare’ sauce too, a stingy hand with that is never impressive.

So far so filling and we’d barely dented £20 and with 50cl of house white too. So we ordered up some Spaghettono and duck ragu, which was very good. The hollow pasta was perfectly cooked and had the guts to stand up to the rich sauce. We debated ordering more as the £4.00 portion we shared got fought over.

Instead we had the Beef Stufatino and it was a tasty one; the meat had the depth of flavour that comes from long, slow cooking and it fell apart nicely. So nicely in fact we didn’t do dessert but then we rarely do. It was time to leave, fuelled by a healthy double expresso.

Purists may well sneer, but Assaggetti is doing a good job at a good price and some of the dishes could actually go head to head with ones from far pricier places. As a lunchtime target or an evening quicky, I’d be happy to go back. Pronto.