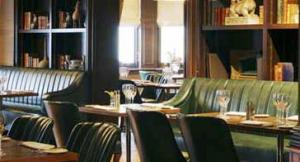 I like a chef who’s not afraid to season with a brave hand. Salt doesn’t scare me and it shouldn’t scare chef. Of course we all need to watch our salt intake but that’s simple; don’t eat too many ready meals and go easy with the Pringles.

Chef Russell Ford at Aubrey seasons well and I think cooks better than many chefs in more landmark locations. Aubrey is a hotel restaurant by the way and that is, in New Labour language a ‘challenge’, which is to say an uphill struggle. Hotel guests have varying, but invariably catholic tastes, and you need a menu that covers all the bases, right down to catering to those who can’t use cutlery. Looking out of his kitchen at some of the people who eat in his hotel restaurant must make many a hotel chef with a bit of talent want to go and put his head in his oven.

Well Russell has talent and he has a menu that meets requirements but exceeds in execution. My warm salad of black pudding with wild mushrooms, potato, crispy bacon and a soft poached egg was perfectly done and the black pudding particularly well sourced. Not as crumbly as a French boudin yet not as solid as a full on Brit, it had speckles of fat and a chewy texture that released floods of flavour. A forkful of that with the egg yolk gluing mushrooms and potato onto it was pretty near perfect lunch food, it was also something I could eat for breakfast quite cheerfully. It looked very stylish too, something not always easy to achieve with black pudding, cutting it into logs and standing them on end was a good idea. 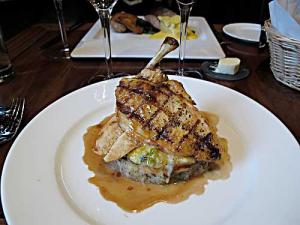 My mains was equally good. I know some gourmets and many chefs tend to sneer at chicken but chicken can be sublime, especially when cooked over coal with the skin on. It’s only when it’s cooked to the Colonel’s secret recipe that it tends to lose its allure. Here roasted organic corn fed chicken supreme, bubble and squeak, creamed leeks and a sage sauce was really excellent. Chicky had his skin on and his bone in and was moist and tender, the bubble and squeak had me squeaking a bit because it was very, very hot but that was my fault for eating too fast. The sage sauce and the creamed leaks were lovely.

You might well ask what my dining companion had, well ask away I was too busy actually enjoying my lunch and nursing a hangover to make any useful notes. She enjoyed it though and it looked good. Will that do?

Aubrey has a nice atmosphere for a hotel restaurant, cosy, intimate, leathery and old time. American tourists must love it. It seems a shame that it may only attract hotel guests because the food while not aiming to be an artistic statement is certainly what I like to eat on a regular basis.