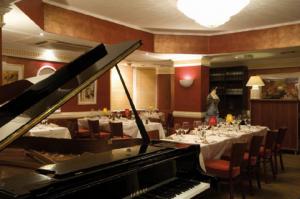 Intense. That is probably the best way to describe the experience at Bel Canto. You see, at Bel Canto, guests are served by waiters who perform opera at regular intervals. And in the relatively small room of the restaurant, that’s quite a lot of reverberations to take in.

For anyone who has been through one too many drunken karaoke session, this probably sounds like a bit of a nightmare. But actually, all of the performances were by trained opera students and young professionals so there’s an assurance of quality. And I know that opera has got a reputation for being a bit posh and stuffy but the atmosphere at Bel Canto is so relaxed, I really didn’t feel at all out of place as an opera virgin. And neither, it seems, did anyone else given most appeared to be tourists.

In fact, between the performances, the artists were more than happy to talk to guests about their training, lifestyle and the history of opera. If anything, guests were actively encouraged to ask questions and to join in the performance. At the end of the second course, for example, we were invited to join in for the chorus of the Brindisi.

Of course, the relaxed atmosphere is not to say that the quality of the dining experience has been sacrificed for something that’s rather gimmicky. On the contrary, the atmosphere strengthens the concept behind the restaurant which, according to their brochure, is a combination of “opera and fine dining with an elegant twist”. But then again, it’s hardly a new concept. In fact, Bel Canto in London is the third of a small chain of Bel Cantos from the restaurateur Jean-Paul Maurel. He has been successfully running Bel Canto’s sister restaurants for over six years in France, where the other two Bel Cantos are located. However, back in London, it was a little disappointing to find that they didn’t have an a la carte menu. Surprising, if they want to be serious contenders in the fine dining arena. Perhaps it’s because Bel Canto is still a relatively young restaurant at only six months old. 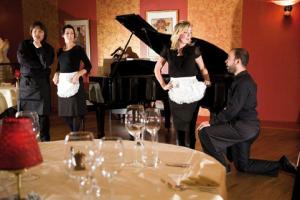 As a starter, I had the salmon gravalax and my companion had the foie gras. Both had proved to be more than satisfactory and refreshingly light – just the perfect way to start a meal where more is demanded of the vocal chords than just conversation.

The main for me was a slightly heavier set fillet of beef, medium rare of course, with pomme Anna. It was the standard sort of offering that you might find in a French restaurant but one which appeased my taste buds. My friend had the slightly more adventurous duck breast with sweet and sour summer fruit sauce. Looking at the delightful presentation, I couldn’t help but wonder if it tasted a bit like Pimms on a plate. As the meal progressed though, it was hard not to feel that perhaps the food was secondary to the opera – all the guests were more than happy to participate and one had to consider whether it was appropriate to carry on eating through the performance.

To round off the meal I had my desert of choice, crème brulee, and my friend managed to acquire the last tiramisu with glee. It wasn’t a real crème brulee, though, as the chef had put a twist on it by adding raspberries and basil. The raspberries were a welcome distraction but the basil was very overpowering. So much so that it was almost another savoury course rather than desert. The tiramisu was certainly very popular amongst the other diners and rightly so given its pleasing combinations of cream and coffee soaked sponge, all in good proportions.

All the dishes served were cooked beautifully and perfectly presented and despite being a set menu, there was a decent selection of dishes to choose from. However, while Bel Canto is the sort of place that gets you humming opera unexpectedly the following day, it’s perhaps not what you would usually associate with fine dining.