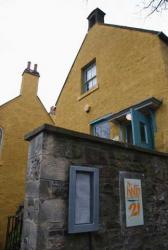 If any restaurant is allowed to paint itself a rather alarming shade of yellow, it is one situated in a complex of council buildings, in this case between Durham County Hall and what was, I think, the offices of the waste disposal unit. It boasted an admirable collection of recycling bins anyway. Walking to Bistro 21 from Durham City centre though, the less than picturesque approach is hidden, since March at least, by some greenery creating the impression of a jar of coriander-flecked mustard.

All this rather unappealing hinterland explains the higher than necessary walls around the place and its concerted effort to create a sense of escapism continues inside. Everything is conducive to introspectiveness and ignoring the B6532 next door – an internal courtyard, a sunken dining room, high windows, oversized terracotta pots tumbling from shelves above, a crowd of small tables and distressed floorboards. This secluded and sophisticated farmhouse ambience is reflected also in the fairly exensive menu, with separate quick lunch and vegetarian versions, which show a peasant Anglo-French descent with some geographical diversions shown mostly in the starters.

My mussels tasted very at home in their sauce of chilli, spring onion, coriander and coconut. It was a dish whose homage to south-east Asian cuisine was perfectly pitched – admiring but not mocking, the levels of freshness and saltiness just right. The other starter, buffalo mozzarella with roasted vegetables, was less interesting on the palette but the quality of ingredients and their execution made up for the dish’s rather conventional conception. The tomato had been cooked almost to the intensity of a sun-dried specimen and the mozzarella had an impressively thick outer layer before a creamer centre.

I had ordered the confit of duck on spiced lentils, a dish which in any dimmer light might have looked monochrome – dark crusty skin against a dark soup with dark puy lentils hiding at the bottom. It looked perfectly appetising though and under the first strikes of my knife and fork the meat slipped from the bones. The lentils complemented the duck well but triggered a bout of déjà vu. By the time I had fished a few more from the dish I had it – Heinz baked beans. I think Bistro 21’s variation might have been an extra slosh of red wine though. The revelation of the dish however were the shy and rather under-resourced greens retiring under the duck. Against the melting meat and the nostalgic lentils, they brought the whole dish to life albeit in frustratingly small quantities.

The second main was roasted whiting, standing in for the menu-advertised salmon. From the moment it was set down on the table, the dish had an air of discomfort and uneasiness like an under-rehearsed under-study. The fish looked beached on the plate, only tentatively lapped by a dearth of orange sauce. It was propped on an over-shiny quenelle of mashed potato and was crumbling awkwardly, suggestive of dryness. The greens had charcoaled ends that had cracked and crumbled on to the side already. When coupled with a smear of sauce, the whiting sang. The potato and smoky leaves were similarly well suited, until the crunchy acridness of the latter’s tips. The idea peeped through in only a few lucky mouthfuls.

To join half of the other dinners, we ordered the crème brulée and the rhubarb jelly with blood oranges and Chantilly cream. The first was well-executed with a good helping of vanilla in the custard and a satisfying crack to the caramel. The second dish arrived looking like a children’s party dessert, and fun to eat for it – bright pinks from the jelly and accompanying poached rhubarb with vibrant blood orange segments. I sort of wished they had served it in a cardboard bowl to complete the experience. It certainly delivered on sweetness but this left little room for the rhubarb’s tart tooth-rub, a flavour that only worked itself in at the very end of a mouthful.

According to restaurant comparison websites, Bistro 21 regularly comes out as one of the best in the Durham area but in this case, my opposition to these methods of generating recommendations was justified. By weighting scores for food equally with service and atmosphere (both of which were impressive here) and value (fairly good at £18 for a three course lunch), what was only an average eating experience becomes an above average dining experience.