Welcomed by a life-size statue of a menacing

looking bull as you walk through the door, it is clear from the minute you step inside Black and Blue, that it’s a no-nonsense sort of place. Best described as somewhere inbetween an upmarket TGI Friday and a downscale Gaucho, the steakhouse chain has managed to cleverly create its own niche and with seven branches already open across London, so far, it appears to be working very well.

Inside, the floor space has been dissected into two, with two thirds occupied by the restaurant, while the remaining third is a cocktail bar. Filled with west-end office workers, the moderately intrusive noise coming from the bar does not mesh particularly well with the intimate, low-key environment that the restaurant is attempting to create. But it doesn’t seem to bother the people in there, as it’s only half seven on a Wednesday night and the place is already completely full.

The restaurant section of Black and Blue is actually quite impressive; heavy wooden tables and stone floors are given extra character by a selection of abstract paintings by the renowned British graphic artist Storm Thorgerson which mainly consist of colourful close-ups of cows’ heads.

The menu focuses predominately on meat, but there is a small selection of salads and few fish dishes. 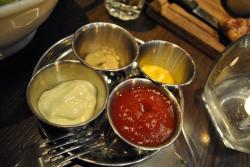 To start we tried the char-grilled king prawns, which came with a garlic butter sauce and crispy ‘chicken tenders’. The chicken was indeed surprisingly tender, well seasoned and with a crunchy crust. Served with a rich, smoky barbecue sauce it was a good start to the meal. The prawns were not so good, overcooked, they were a bit tough and the juices had almost been cooked away, luckily the powerful flavours from the herbs and the charred notes from the grill did a good job of making up for it.

Moving on to the steak. Black and Blue is proud to proclaim that it uses only the best British beef, sourced from farms in Yorkshire and Lancashire. There’s all the usual cuts on the menu, plus the option of a T-Bone and a cote de boeuf.

The steaks arrived with extremely generous portions of twice-fried chips and a large bowl of house salad to share which is included in the price. You also get the option of either béarnaise or peppercorn sauce, or for an extra £3 you can even get a slice of foie gras.

Served on a wooden chopping board, the T-bone failed to fully live up to my expectations. More bone than meat, it was overcooked and lacked the depth of flavour that T-bone’s are usually renowned for.

In contrast the fillet was almost without fault. Cooked perfectly, the skin was crisp on the outside while the knife almost fell through the meat it was so soft. Not a steak typically known for having lots of flavour, there was no shortage here and the 200g portion was plentiful, too. Unquestionably, one of the best fillets I’ve eaten in a London steakhouse.

The wine list features an interesting selection from around the world, but a few more bottles under £20 would have been nice to see. To go with the steaks we had the Finca Sophenia Argentinan Malbec, full of strong dark-fruit flavours it worked perfectly with the rich meat and is a pairing worth trying. 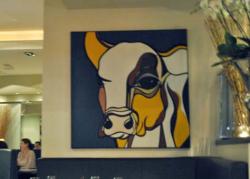 of the huge pudding portions on the adjacent table. Two chedders and one blue cheese were served on a similar rustic board as the T-bone earlier. Not the most memorable selection of cheeses ever assembled it was bland, unadventurous and ultimately uninspiring.

Cheeseboard aside, there’s a lot to like about Black and Blue, the layout is simple, stylish and relaxed, the portions are huge and the service is excellent. It’s just a shame the food doesn’t always quite reach the same heights. At just under £50 a head it is not particularly cheap either, but if it’s quantity you’re after and reasonable, unpretentious food too, you could do a lot worse.