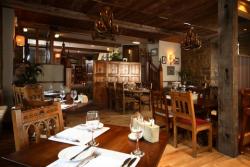 Blackfriars feels like a confused place, like a split-personality restaurant. From the outside, and from its website graphics, it presents itself as a medieval restaurant. Inside the door though, and the emphasis is on locally sourced ingredients and sustainability. A map plotting the restaurant’s producers lies on a coffee table and a silver Green Tourism award is up in the corner. No earthenware jugs overflowing with mead, or long tables and benches in sight then.

I readjusted my expectations accordingly and prepared myself for dishes yearning after the adjective ‘hearty’ and lots of capitalised nouns on the menu proclaiming ingredient provenance. When the menu arrived however my perceptions lurched again. It was packed and verbose, the accompaniments of dishes careering into the price column. There were plenty of capitals but amongst the North Sea fishcakes, Montgomery cheddar and Scottish salmon were whispers of the foreign and exotic: nori, Manzanilla, quince, shiitakes and truffles. I imagined a glint in the chef’s eye as he smuggled his contraband ingredients right under the nose of the diners.

This edible confusion was amplified by Blackfriars’ setting – the dining room had very definitely been decorated by the first personality using National Trust gift shop merchandise or the props from a production of Henry V. Antler chandeliers carried static flame light bulbs. Lumps of rock sat on the table holding piles of salt and pepper in carved indentations. And there was wood everywhere: we were surrounded on six sides by the stuff.

It’s not that the setting was necessarily anathema to enjoyable eating, but it was just a bit distracting. The food tasted good, and very good in places, but the problem was that it took a while to untangle that realisation from the restaurant’s bewildering get-up. When the food arrived, it was trying its best to look sophisticated but the stronger impression was of an admirable piece of art confined to a gaudy and overwrought frame. Or perhaps I hadn’t quite been captured by the charm of the place yet.

The pan-fried Cumbrian pigeon was tender and a pleasing pink under a dark chocolate and walnut sauce that excelled at bringing out the depth of the meat. There was an incongruous ingredient though. The bird came with Manzanilla jelly and I would suggest the two did not meet again. Scallops, even if they were slightly overcooked, tasted at home in the company of samphire and a lemon dressing. A mention should also be made of the enthusiastic wine recommendations underneath each main on the menu. Perhaps first-person chattiness should become obligatory on menus – it certainly brought a smile to my face.

The exoticisim was most pronounced in the pan-fried Pollack with leek and oyster soup, chicory and a crispy oyster. Here the irrepressible wine commentary proclaimed the dish as ‘very English’ but it really tasted like a deep salty East Asian broth, the chicory doing a good impression of pak choi. The bivalve was indistinguishable in flavour from its crust and the Pollack might have been just slightly overdone, but I’d forgotten by the time I was scooping out its last flakes from the soup.

The Eastern influences manifested themselves again in the roast pork chop dish and which was accompanied by rolled nori and belly pork, a combination whose powerfulness and novelty put the main act to shame. The carrot puree and langoustine jus added welcome moistness to a slightly dry piece of meat, but in too small a quantity.

I could not fault my pudding though. It was one of the best I have had the pleasure of eating in recent months: a delicate strawberry bavrois cut through by an orange and rosewater dressing, the high and shrill tones of both supported by a buttery and earthy basil shortbread. The goat’s curd and currant tart was just as excellent. It was as if the chef was just enjoying himself and so, too, was I, eating my refined dessert off a laminated place mat, in a gaudy medieval restaurant with a faux antler chandelier above me. I think I was beginning to understand Blackfriars’ confused charm.