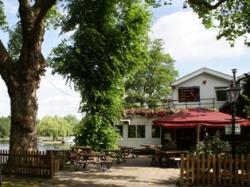 Some things calm the soul, just make everything seem a little bit better. And after a tortuous journey involving two trains and one bus we found one on the outskirts of Kingston; a stretch of the Thames which on a dry, late Spring evening was picture perfect.

Alongside the riverbank, in this very English setting, sits Boaters Inn. It’s a big space, and has a large garden, with plenty of seating – even on a slightly chilly evening a lot of people were making the most of the dry weather. Inside, although there isn’t a separate dining room, the area is split-level at the furthest points from the bar, which is where we headed, ale and wine in hand (that’s one each, not one of each, each, which would have been going some, even for us.)

As well as a number of individual starters, there are three sharing platters to choose from: vegetarian, fish and meat. This tickled our fancy, but all looked really good, so we asked our waiter for a recommendation and after some thought, he suggested the fish platter. It was sound advice: salt and pepper squid was tender and tasty; potted crab came with liquified butter, which was good, the crab meat deliciously sweet; smoked salmon was full flavoured; devilled whitebait were crispy, with a punchy fish flavour, while two prawns were mighty beasts, packed with flavour. Equally good were the accompaniments: the preserved lemon aioli and the chilli jam went with the fish really well, while the guacamole was blissful; rich and yielding avocado, with a wallop of garlic giving excellent depth of flavour to it. Although best suited for two, the platter could easily have been shared by more.

After the fish-fest, it was time for some red meat. Grilled lamb leg steak with ratatouille and runner beans was a very nice dish, the meat cooked medium rare as requested, while the ratatouille had good flavour and a satisfying consistency. The Boaters Inn burger was terrific; good quality meat, slightly pink, full of juice and flavour, with perfectly cooked chips on the side.

At this point, we could easily have stopped eating and waddled back to the bus stop, but we felt duty-bound to try dessert, and the choice was very inviting. After some deliberation, we went for the chocolate brownie, which had a rich chocolate flavour and fudgy texture, some vanilla ice cream and a raspberry sauce supported it well. We also had the rhubarb, ginger and apple crumble with custard, which was excellent; the initial hit of tangy rhubarb being complemented by warm ginger coming through, the apple giving a note of sweetness. Both were top-notch comfort food.

There is a good choice of ales, we understand routinely there are 15 or more, plus up to five guest ales, most of which are local. We tried three local ales, all were very good, each about 4.5 % by volume, they had good fruity notes to them. Wine is available by the glass, carafe or bottle, and we tried two, a Chilean Sauvignon Blanc, and a French Duras Cabernet. We liked both; the white was crisp and fruity, while the red had good texture and fruit flavours.

Boaters Inn has jazz every Sunday evening, we understand that the style will differ from week to week, so there should be something for everyone, from the trad jazz fan, to someone who prefers something a little less challenging. There’s a dedicated website for the jazz evenings, www.boaterslivemusic.com.

Although its position on the river makes Boaters Inn a good place for day-trippers to drop into on a lazy day out, it’s also very involved in the local community, with themed evenings, Sunday roasts and charity events for local organisations. If we lived closer, we would definitely be regulars, and are very happy to recommend it.

By Foodepedia6 May 2010Restaurant Reviews