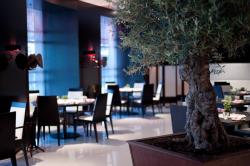 The Park Plaza hotel is south of the river, but only just. Run full tilt out of the foyer and you’ll be in the Thames seconds later and soon bobbing past the London Eye.

South of the river but not of The South, the hotel resolutely turns its back on the area and instead looks toward Parliament across Westminster Bridge. In fact approach as we did from the rear and you find yourself forced to detour around endless pelican crossings before making your final assault on the front door.

Even then it’s not over, the escalators packed with happy tourists take you up to a modernistic foyer (i.e. it looks nothing like one) with no sign of, or signs to, the restaurant. It is in fact a sharp left and left again down a long moodily lit corridor toward a tall reception desk where a guardian coolly appraises your approach while you will yourself not to do a Miranda pratfall.

And yet in the restaurant it’s friendly and family, guests from many nations are eating and there are even small children too. Yes the mood is Hotel, but the food is something else. Back in the 1990s Joel Antunes was chef/patron at Les Saveurs, now sadly gone to the great griddle in the sky, and back then we flocked to eat there. Now he’s back in London and thanks to him this is no ‘hotel restaurant’.

As the word Brasserie suggests, classically trained Joel has chosen to go for French food done simply and well, with no fussy, silly experiments or mouth-clogging pretentious philosophy, and he has done so brilliantly.

Pate en croute could so easily be a bit of pork and crust on a plate, a French version of gala pie perhaps. This is instead a wonder, a thin slice from a raised ‘pie’ that clearly took ages to make and was infused with care and love. The pastry is firm to the knife yet melts in the mouth, wobbling darkly flavoursome jelly sits in the air spaces and in the centre is a core of fridge-butter-firm foie gras pate. Around it is juicy meat studded with green peppercorns and pistachio nuts. Crowning the slice are four plain leaves of Little Gem lettuce lightly dressed. The whole thing is simply perfect, one of the best things I’ve eaten all year.

P raves over her roast figs with gnocchi ricotta and Parmesan cheese. It’s that ‘grown ups only’ sweetness of the figs set against the smooth and subtle flavours of the perfectly cylindrical gnocchi, all dusted with Parmesan umami that does it. These are good starters indeed; even the small children at the next table are eating theirs without dissent. Good children, good parents. Needless to say, they are not English. 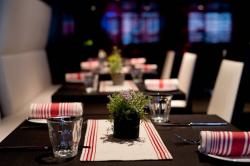 I seem to have eaten a lot of sweetbreads recently, I can’t resist them. I don’t do it in a ‘look how butch I am by eating offal, kind of way,’ as some people do, I just like them a lot. Would I be put off by their real name of Thymus Glands? Probably not, after all I know what goes into haggis and I still like it.

At Joel’s the glands are served in a Le Creuset saucepan, which is a bit too rustic. You can’t actually see your food unless you stand up to look in, which makes other diners wonder if someone is playing the national anthem

It’s obviously been a bit of an issue as the waiter asked if I wanted my glands on a plate before he even put the pot down. A lot of people seem to want my glands on a plate, I don’t know why. I ate these the way Joel intended. If nothing else the heavy pot kept the food hot.

And what food, a massively generous portion of veal sweetbreads with Pomme Maxim – layered discs of potato baked off – and some roast potatoes which had been ‘turned’, in other words shaped into torpedoes, something you don’t see much of these days. Whatever fat they had been roasted in had infused them wonderfully so that they transcended the norm. Oh and let’s not forget darkly aromatic and bouncy porcini, all paddling about in a rich jus that made me scrape the pot.

Unable to see into my dish, P was happy with her wild turbot with roast new potatoes, courgette and a shallot confit. It was light, packed with tastes and looked right on the plate – you could actually see the courgette, it wasn’t reduced to a puddle or a foam or a jus or whatever. Same for the potatoes, no frills just flavour.

Desserts were crackers too, when did you last have a baked Alaska? This dish deserves to be called back if it can be always done as well as it is here. The balance of the chill vanilla ice cream and the hot meringue made me childish with happiness, while down below a sponge base soaked in Grand Marnier was a grown up treat.

They actually do a Children’s Menu at Brasserie Joel, as well as a set menu for £29.95, one plate deals for £9.95 and pre-theatre menus too. The prices are very good for such ridiculously good food from a chef who really seems to care.

A lot of critics seem obliged to say that Brasserie Joel is a great restaurant in the wrong location. It’s the usual snobbery towards hotels in general and south of the river in particular. I disagree. It’s a great restaurant that happens to be in a hotel. Full stop.