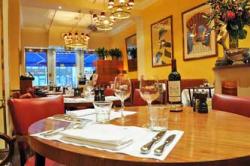 The French have a word for the person who jollies things along at public events, parties, dinners etc. He or she is called an Animateur – the person who animates (in a non Disney sense of course), or literally brings to life. Brasserie St Jacques’ animateur is co-owner Richard Weiss who buzzes about cracking jokes, mixing steak tartares and flambéing the crepe suzettes and, very nearly, his impressive head of hair.

And this is what distinguishes a brasserie from a restaurant; the informality, the sense of camaraderie and, in the good old days, a thick fug of Gauloise smoke staining the walls and the patrons’ lungs a nice ochre hue.

It’s hard to pull off with conviction, the room needs to have a patina of acquired character, you can’t just paint it on. Brasserie St Jacques has had a few incarnations, most notably as Petrus, and the past has made the room feel lived in, even if the decor has clearly been added. Some people say that’s inauthentic, but a London restaurant is never going to be authentically French is it? Tonight, unseasonably warm, the doors are open and people amble in to take a table or sit outside to eat and smoke to their hearts’ content. Ashtrays are produced in seconds by staff who have the right blend of Parisian cocksureness with professional and friendly service. In a stuffy street, it’s a breath of fresh air.

So what about the food? The menu is as physically large as any Parisian example; Van Gogh would have had no trouble hiding behind it even with both ears attached. On it are all the dishes you expect: snails of course, oysters, steaks, chips, veal kidneys, cassoulet and all the rest. Real solid stuff made for easy eating.

We had roasted bone marrow with a side of parsley salad. The bones had been split asunder, unlike at St John, so getting the bone marrow off and onto the toasted sourdough only needed a teaspoon and not a surgical probe. Nicely creamy, the bone marrow slipped down a treat. A dish to drive vegetarians out the door, it was classic braz grub. The escargots, served out of their shells, were a little bit light on garlic pour moi, but fat and juicy in themselves.

Scallops with pea puree I felt could have done with a bit more salt in the puree but they had that all important caramelisation and were perfectly cooked for texture and sweetness while a rabbit terrine was deeply chunky and rustic.

Steak Tartare was made at table, Richard cheerfully adding mustard, anchovies, Worcestershire sauce and a dash of cayenne before tossing the mix together. Table side prep is regarded as old chapeau these days, but I like it. The trick is not to sit silently watching but to ask questions, get involved and enjoy the interaction. Richard’s potted history of his wide-ranging career was a cabaret in itself. The tartare I didn’t try, but the man who did loved every last bit.

For me a lamb rack, served for two that was carved at table (the trollies never stand idle in this place) was perfectly pink in its centre and came with an unctuous boulangere to help it along. I silently stole some well made chips from the bowl that had come with the tartare to add to my piled up plate.

Dessert of soufflé came with some insider knowledge from Richard, ‘Watch the staff disappear,’ he said, ‘we always make two soufflés per order to be on the safe side and the first waiter down the stairs gets to eat the spare!’ Well and evenly risen, the chocolate soufflé benefited from a spoonful of nicely knobbly pistachio ice cream inserted in the top.

Crepes Suzette was the usual flaming fun, pure theatre for the sake of it, and the sugary sweetness well offset by the orange juice, plus the kick of what was left of the brandy and Cointreau after the five foot flames had died down. Richard, the pyromaniac, is also the sommelier and his pick of wines by the glass was a good one.

There will be free jazz on Fridays and the week after this, opera on Tuesdays, so you know whether to avoid those nights or hurry along to enjoy.

The intention is there and the cooking by co-owner Laurence Glayzer, who has a fine pedigree of French cooking in top places, is assured. I spotted sous chefs from other London French restaurants by the door enjoying a late evening snack and I think that should tell you all you need to know about Brasserie St Jacques. Salut!