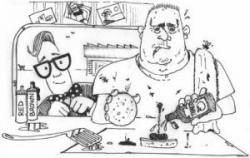 Burgers, it seems, are all the rage. My young friends tell me that Twitter is alive with people chasing ‘the best burger in town’ in the manner of obsessed birdwatchers. No sooner has one greasy Twitcher found a new burger outlet than a score of others, no doubt clad in fluorescent anoraks, hurry round as fast as their Oyster Cards will carry them.

I find all this very odd. To my mind burgers are boring monotextural things that offer no variety from first bite to last. They can taste good or bad depending on the quality of meat used, the ratio of fat included and the accuracy of their cooking. What they are not is a proper meal or a taste experience.

They come of course from America, like so many infantile things. Unable or unwilling to use cutlery, and with the sophisticated taste buds of fourteen year olds even when into their 60s, Americans have always loved burgers immoderately as can be seen by the high incidence of obesity over there.

This in turn led to the sordid mechanisation of burger production. Huge burger outlets now bestride the entire world so that one can get exactly the same burger in Tokyo as one can in Torquay. This has in turn created a demand for cheap meat that many believe has furthered the destruction of the rain forest to create grazing land, and to enormous cattle farms where the cows are miserably crushed together like battery chickens.

‘Ah,’ the new generation of burger fans say, ‘but that is entirely different. Those are the burgers that poor people eat, the ones we consume are of a different order together. Far more middle-class and acceptable. Some even have foie gras in them, you know? These are the ‘real-thing’.

I suppose this burger fad, and it is a fad let us be honest, is built on four things: the critics retreat from promoting fiddly food made with foams, the recession’s bite, people’s Twitter-led desire to be ‘first’ at finding things, and the fact that so many young people today have rather simple palates.

However I have always prided myself on being open-minded. I supported Pol Pot even when everyone said he was a bit of a bounder, and I often sat around the campfire with Che Geuvara discussing the legitimate aims of the proletariat and the best way to maximise worker production by judicial use of death squads. Not many people know that Che played a mean hand of Canasta and used the proceeds from the sales of his poster to finance an exquisite collection of Meissen porcelain.

And so I decided to eat a burger again, something I have not done since serving in ‘Nam. Word had it that a Meatwagon roamed the country and that the young people chased after it, updating each other by text and Twitter as to its whereabouts. Presumably they have little better to do with their time. Luckily I had already spotted where I believed the Meatwagon was, in fact where he was most Sundays, the car park at my local DIY Superstore.

Needing some plasterboard, chains and padlocks for a small suite of rooms I am building in my cellar I set off post-haste and even on opening the car door I knew I had struck grease. The smell of frying onions was wafting over the car park most enticingly and the sizzle of patty on pan was clearly audible.

A small crowd of burger aficionados had already gathered. I spotted @badplumber, @baglady, @lonelypaedo and @fatbirdwithcamera lining up expectantly at the van’s window where the charmingly rough-looking chef was flipping burgers with insouciant ease. Suddenly, despite my large breakfast I was ravenous. As my good friend William says, ‘a good chef can always make you hungry.’ How true, how true.

On my turn finally coming I took the opportunity to ‘grill’ (how wonderfully witty) the chef with my unique questions. What was the provenance of his meat? ‘A bloke in the pub sells it me’ he said. Is it locally sourced? I enquired. ‘Well the pub’s my local if that’s what you mean,’ he replied reaching for a tin of Panda Cola to slake his thirst.

The burgers did look a little on the small size though and they seemed to be getting smaller as they cooked. When, in my ever helpful, way I remarked on this chef pointed out that no one wanted a burger that was too big to fit in their mouths, did they? I replied that yes, apparently they did, people in London were actively seeking out burgers of a monstrous and obscene size. ‘Well that’s London for you innit,’ he said savagely, ‘ load of twats aren’t they?’ I felt obliged to concur with his expert opinion.

Spotting my Dictaphone he suddenly became less friendly. ‘Are you from the council? I ain’t done nothing wrong. I got a licence and everything and it cost me a fortune you crooked bastards!’ As at this point he was waving his spatula at me in a threatening manner and trying to get out of the van, which was rocking alarmingly with hot chip oil slopping everywhere, I decided to leave without my burger.

I feel I have done my best to join the current lemming-like love in with the burger. That I failed to physically get to grips with an example is a matter of some regret of course, but as I contemplate a supper of veal kidneys with tagliatelle I cannot really bring myself to believe I am missing out.

Fads are for younger critics, the eternal verities of fine cooking are neither affected by foams nor by minced meat shaped, grilled and stuffed into a bun. Soon the burger will revert back to being what it always has been, a meal for people for whom food is a necessity but seldom a pleasure.

Then of course, mark my words, the Doner Kebab will be the next big thing to be Tweeted. Remember my dears, you read it here first.