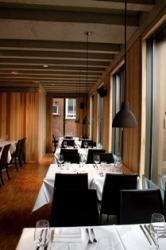 As we reported after attending Caponata’s launch in early December its owners have created a cool contemporary venue. The ground floor osteria is very spacious, and as we had said before opens up into a stage area at the rear to enable the whole ground floor to be used as a good sized entertainments venue. The upper floor has a quiet feel and a slightly more formal, ordered look. Decor in the entire place is a mix of concrete softened by a huge amount of warm, plain wood cladding, a sort of minimalist warmth.

Seated at our table, we each had a cocktail while we chose our meals, a Negroni and a gin martini. Cocktails on the Caponata menu range between £7 and £8 each, these two were very good, a great way to start the evening. We chose from both the set and a la carte menus. The caponata after which the restaurant is named, featured on the set menu, was a lovely Sicilian dish, a little like a rich, thick Ratatouille with a bit of attitude from the addition of olives, capers and some sweet and sour going on, it was robust and lovely, great on the palate too. The tuna with a cumin and pistachio crust was a much lighter dish, the tuna nicely seasoned by the hint of cumin and given texture by the pistachio had been lightly seared, it was an excellent piece of fish, sliced in medallions and well supported by its bed of rocket, some finely sliced fennel, which had good bite and its lime dressing.

For our mains, the Barbary duck breast, filled with breadcrumb, olive, caper and currant stuffing, was beautifully pink and juicy, with a firm, but tender texture, the duck had great flavour both with and without its stuffing, some caramelised carrots and date completed the dish well, the sweetness from each complementing the duck perfectly. The saddle of rabbit, filled with a black truffle stuffing, was a delicate dish, the subtle flavours of the meat and the stuffing working well together, the leg confit also had good flavour. The rabbit was cooked well, with a firm but moist texture, and was accompanied by some sautéed chard which was nicely buttery. We had a dish of roasted vegetables as a side between us, which went well with both dishes.

It was suggested that we must have dessert, so, of course, we did. The caramelised pear on almond shortbread was exactly that, the pear retaining a little resistance after its cooking was just sweet enough, the shortbread, had good crunch and a nuttiness that contrasted well with the soft fruit, these two were well balanced by a lavender sauce and camomile ice cream that completed the dish. The rice cream semifreddo, was a well chilled creamy confection, a little like an uncooked cheesecake in its texture and not overly sweet, a ball of passion fruit ‘ice cream’ more like sorbet, sat on top of it and this had some serious flavour, a great tang that contrasted perfectly with the semifreddo, the two composite parts working harmoniously together.

Caponata has a good range of wines, both by the glass and by the bottle. Bottle prices start at £16. We chose a glass each of Inzolia Terre di Giumara, a nice crisp fruity Sicilian dry white with our starters and with mains a glass of La Segreta Rosso, which had a lovely softness, to accompany the Rabbit and a glass of Hauner Hiera, a more full bodied and bolder red, with the duck. All three wines were excellent. Service was good, we were attended to well.

Caponata is a very good local restaurant which is making a name for itself. Two restaurants in one it offers a wide choice to its customers, with some very interesting dishes on the menus it is unsurprising that it is gaining popularity.