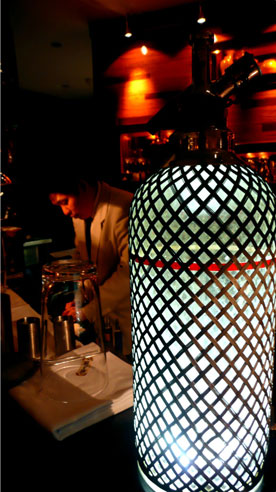 ‘Where have you been for the past 20 minutes?” demanded my friends, keen to tuck into jellyfish and abalone, delivered in my absence.

‘Listening to John Betjeman’s life story,” I explained. ‘Did you know that the IRA put a price on his head?”

Just past Pope John Paul II (one of many disconcerting oils) the Male, Female and Unisex facilities are an impressive distraction. With glossy veneers, isometric tiles and piped prose, they upstaged the windowless, mirror-pillared dining room. Despite Chinoiserie, this resembled a nightclub so strongly that even after three hours with silver chopsticks and hot towels, I couldn’t ditch the feeling that we were sat on a dance-floor.

Five months after the event, I was being treated to a birthday dinner at The Dorchester’s Cantonese, ‘China Tang’. It takes its name from founder, Sir David Tang – designer, gold-miner and cigar aficionado. Cuba’s Honorary Consul no less.

In the deco bar, we dived straws into cleanly prepared filthy martinis. Despite having to duck a hopefully accidental ice cube missile, this contrives to be a more civilised space then the five star’s main bar. There, what was a subtle, limed-oak haven, has been ‘upgraded’ into a vulgar cave of coloured stalagmites and moody music.

Even though their product is pleasure, Sommeliers can be terribly earnest, probably because they are relied upon to generate so much of a venue’s profit. Thankfully, Tang’s was amicable, patting me on the back when I agreed his suggestions. China, incidentally, is no stranger to the vine, being the sixth largest producer.

Having encountered troubled Beijing bottles at ‘Vinopolis’, our pickings today came from closer to home. These included a strikingly opulent, oak-matured Austrian white, a lush Chilean three vintage blend and a chilled North Island, New Zealand Pinot Noir. The latter was served not only with a back pat, but a back-story. When on Penury Way, its producer planted pumpkins between vines to raise funds at market.

Fuzzy winter melon fruit swam in a clean consommé – not just an appetising starting pistol to the meal, but apparently good for weight loss too. Loathing their kind when encountered alive, I forked the jellyfish vengefully. This culinary first revealed a texture of crimped coleslaw or ‘rubber bands” as a hollow-legged friend later put it, adding, ‘I love them!” I think I agree, although a muddy sauce mired this version’s tagliatelle-like strands.

Braised abalone provided another first. A chef friend once told me that these rock snails are a delicacy because of the difficulty harvesting them at considerable depths. £60 bought one livery, chewy splodge which squatted hauntingly bad oyster sauce. Despite our initial excitement, the result reminded me of the tenderised conch meat endured on a Caribbean holiday – best liberally cleansed with anaesthetising Smirnoff.

Less successful still, salt and pepper lobster claw was spongy, having drowned many deaths in a deep fryer. And vim-less scallops lazed on re-used shells.

Thankfully, in braised pork belly, we reached the dish of the dinner. Beneath a 10 Yen coin thin crust, which could have been caramelised by blowtorch, its flesh was near sinfully moist and fattily tender.

All around, signature Peking Ducks were wheeled towards an A-Z of celebrities. The colour of emergency and puffed like bagpipes, these disconcertingly complete specimens perhaps explained the bitter mood of the waitress who carves some 50 a day. (Incidentally, my well-intentioned question – had she visited ‘The Peninsula’, a humble, but ‘legendary Chinese”, at Greenwich’s Holiday Inn – was met with incredulity).

Overall, even to a relative rookie of China’s Eight Great Traditions (or regions), it had become clear that China Tang serves sloppy, nursery slopes Cantonese. There must be a myriad of better options dotting the High Street. Its appeal, I suppose, is its discreet location, allowing a chichi clientele to sate their cravings far from autograph addicts and phone-photo hunters.

We revolved onto Park Lane, glimpsing our fleeting reflections in a gliding Rolls. What, I wondered, would encourage my return? In a positive effort, I will end by awarding it ‘W1’s best WC’. Rather than flex the credit card to snapping point for middling plates, I will definitely be back to spend a penny…