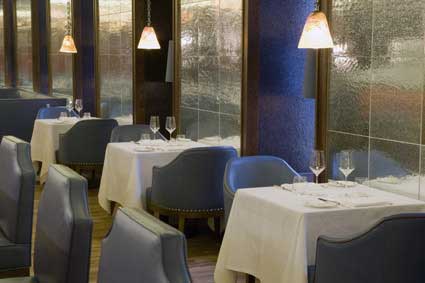 Richard Corrigan’s life has been coloured by pathos. From tending roots and shoots and sorting cows from sows, to tussling chicken-crazed foxes, he rose from the bog where electricity was unknown, to cook for the Queen. In rehabilitating ‘Bentley’s’, the barrel-tummied Nimrod also aroused an interest in food ‘from our islands’. In his latest venture, he brings a signature of almost evangelical ingredientism. ‘Corrigan’s’ unfurls on the site of the three Michelin star-spangled ‘Chez Nico’. The destination for pilgrims of the posh plate, it glittered until the pursuit of perfection overwhelmed its patron.

My friend recalled the time when his parents treated him to dinner there in the name of gastronomic education. Apparently he approached the haute blowout with such gusto that it ended wretchedly. A full house witnessed the return of a barely masticated menu to linen! Whilst that was twelve years ago (and as many stone) I was frightened that faced with an outstandingly appetising menu, he might garnish the Celtic tiger’s version with an encore.

Corrigan does counters like someone who enjoys sitting at them. We hung over handsome marble, kindly lit and like the clientele, grey-topped. Most of these are full-sized too, doubtlessly buying critics reports of gutsy food. Although I anticipated a hearty antidote to tweezered presentation, what I met was gracefully ambitious.

Inventive sliced suckling pig sausages were platform to juicy oysters and flawlessly crisped duck tongues. By contrast, steak tartare showed schizophrenia. The patty evoked a deconstructed-reconstructed burger bound in ketchup. To add insult to injury, a glob of mayonnaise stood in place of a golden yolk.

An inquisitively devised wine list was so helpful that it almost replaced the sommelier. It was populated by ‘natural bottles’ and celebrated unloved grapes like peachy Austrian ‘Rotgipfler’ – a lovechild of racy Riesling and groovy Grüner Veltliner.

For the main acts, my parched ox-cheek with mushroom ravioli was less inspiring then the lustrous, fibrous, winey version at Heston Blumenthal’s ‘Little Chef’. That cost two-thirds less. My friend bagged what looked a veal special deal: rose loin, caramelised breast, sweetbread and grilled langoustine. The tender crustacean was so gently handled that it was almost kicking, and the sweetbread was succulent. The breast was not best, however. Tough and dry, it required resolve with the silver knife. Alongside, broccoli came over-cooked. And goose fat chips were thickly dull rather than decadent.

The gents extended behind the sign of a gamekeeper. A nice touch, although if I was the architect, I would worry about the long, low sink which a good luncher might mistake for a urinal.

A rhubarb soufflé was served with ginger ice cream and waiter penetrated with crème Anglaise (I looked away). Hardly eggy and intensely vaporous, it left me breathless. Despite a variety of smiling suggestions, staff failed to identify an appealing cheeseboard.

Overall, Richard Corrigan is great at dining room rhetoric. Like Bentley’s, he has collaged a classy, clubby, man’s-man sanctuary served by sweetly inclined but occasionally inexperienced staff. Game for game, Corrigan’s appears to be struggling during the pause in shooting, however. Whilst everything was edible, and two dishes outstanding, slow cooked aspects suffered. And despite big talk, portions were small. Providing that the kitchen bothers a bit more with basics, I will gladly return in a stone or two…