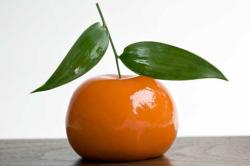 I’ve spent all last week steadfastly refusing to look at any reviews of Dinner whatsoever, while sticking my fingers in my ears and going ‘nananananana’ if anyone close was talking about the place.

Even so I kept hearing the phrase ‘meat fruit’, which obviously was a joke waiting to be made, but as Jeremy Clarkson regularly finds out, some people don’t like jokes unless aimed at the Right targets. In fact it’s a dish at Dinner and one of the most remarkable amongst many wonders.

And wonders are what we all expected Dinner to be about. Would front of house greet you in sequins whilst juggling fire sticks? Would you be led to your table by a maitre d’ dressed in top hat and tails? Heston’s TV programmes have cast him more and more in the mould of a stage magician creating showstoppers with smoke and mirrors. Sometimes it’s been hard to remember he’s a chef but as Dinner demonstrates, he definitely is.

Dinner (not Supper, that mysterious mealtime invented in North London) is also open for Lunch but surely the night is the time for magic? The large ‘space’ is impressive, reflecting the money that Mandarin Oriental Group has to play with, as well as the moneyed clients they intend to attract. Dinner is cheaper at Lunch, but in the evening, and if you like splurging on the wine list, it can be a very expensive night out indeed.

But then this is an event restaurant. As much as Heston may have shuddered at the idea of his new restaurant being labelled a theme park, it does have a theme. The restoring and validating of the cooking of Merrie Olde Englande through the use of modern techniques and the dumping of some of the more disgusting dishes allegedly beloved by our ancestors.

The main kitchen is on show and Ashley Palmer Watts who is the full-time head chef here, is on the customer side of the pass and relaxed enough to chat to me as he casually passes orders to the cooks. The kitchen is running like clockwork, as is the spit that is roasting pineapples against an open flame. 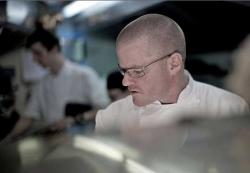 Of course through the use of Ye Olde Electricite, and some bits from B&Q, they could have made a spit for a lot less expense, but where’s the theatre in that? Heston himself spends his time either standing like a Tussaud’s waxwork by the door or cheerfully moving among tables and endlessly posing for photographs with diners. The atmosphere is most unusual – part gustatory and part celebratory. A homecoming parade for the nation’s favourite bald chef.

Menus are simple sheets from the laser printer but come bound with a little note about a selected dishes’ provenance, a kind of Christmas cracker motto effect. The front details the dishes; the back explains their history. If you need to know more the lovely waiters are all very well informed, although being asked unprompted if I want something explained made me think of the classic ‘Have you eaten in a Harvester before?’ line.

So the famous Meat Fruit. It looks like a satsuma, a Belisha beacon of orange on a wooden board with a pile of toasted bread alongside. ‘It’s all edible but for the leaves,’ says the waiter, which is probably a sound warning as with Heston there’s a temptation to try nibbling the plate just in case it’s part of the meal.

Inside the thin gel masquerading as skin, is the most unctuous liver mousse. It’s more than that of course; it’s subtler, creamier and softer with the added back bite of the citrus. The crunch of the bread holds it onto your taste buds and prevents it from dissolving too fast. You end up planing the wooden board with your knife in order to get every last bit off.

Now ‘porridge’ is perhaps the other word Heston will have inscribed on his headstone. Everyone has heard about the snail porridge at Fat Duck, indeed the very concept still sends some people into paroxysms of gagging. Here at Dinner is porridge again but snails are absent. Instead it’s cod cheeks in an electric green porridge with pickled beetroot, garlic and fennel.

Cod’s cheeks are always delicious, the wonder is that only relatively recently have they come back onto serious menus. Here they star and the mealy porridge absorbs and carries the flavours of the beetroot, garlic and fennel. Good to see beetroot used, its sweetness more popular back in 1660 when sugar was but a dream. 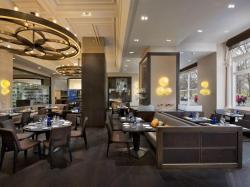 If picking a starter was hard, mains were even harder. Somehow the simplicity of the pork chop intrigued me, what could be done to make a chop anything but a chop? The answer as it turned out was to turn up its ‘choppiness’. It’s Pata Negra or Black Foot pork, beloved in Spain and marbled with fat which lubricates the chop as it cooks so preventing it from drying out, as chops tend to always want to do.

It is meltingly delicious and porcine, simple crunchy cabbage is underneath and a Mr Whippy of pomme puree helps gather up the Sauce Robert. I don’t know who Bob was, but he knew how to make a mean sauce. Carrots with caraway seed, the seasoning of old Northern Europe, were better than ones from my allotment, and I don’t say that very often

The Tipsy Cake is already famous, you have to order it with starter as it takes at least 35 mins for the pineapple to caramelise on that spit and acquire a deep flavour imbued with smoke. Its very good, as is the brioche infused with cream and cinnamon. Coffees and teas are served with a small cup of Earl Grey tea mixed with white chocolate to become the texture of condensed milk. It was quietly rather stunning as a ;final’dish’.

And so there it is, Dinner by Heston. It’s not the best restaurant in the world, because that’s an impossible concept, but it is the most interesting and amusing in London by a very long way. Only HB would have had the imagination to try something so very new and original and, I suspect, only he and his team had the science of cooking required to pull it off.

When the first night hullabaloo has died down and HB is once more back on telly and not at the pass, hopefully it will become easier to get a reservation. I for one want to try more of those dishes as soon as possible. Dinner has definitely been served.