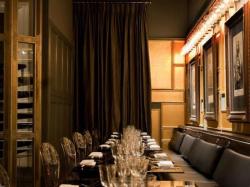 Whether it’s the desirable SW postcode, ex-Bluebird head chef and Great British Menu champion Mark Broadbent overseeing the menu, or the gold embossed logo, everything at Eighty-Six points towards a restaurant that takes itself very seriously.

Occupying a grand Georgian townhouse, Eighty-Six boasts a lively cocktail bar and gallery restaurant, both of which work together in surprising harmony. The crowd is generally young, beautiful and emphatic, thanks no doubt to the chi chi décor and seductively charming staff. This is a place where people come to be seen, encouraged by an abundance of mirrored surfaces, and into being voyeurs of their fellow patrons.

Kitsch Victorian-style portraits with animal heads punctuate the walls and hint at a more unconventional streak, however. Reassuringly, this is not just any another high-end Chelsea eaterie. Things look good, but it doesn’t mean they’re not well-considered. Nowhere is this more evident than in the bar restaurant’s carefully edited wine list, which offers everything from an accessible Australian Gewurzrtraminer at £23, to a 1986 Chateau Latour at an eye-watering £800.

So, what can you expect to eat? Under the watchful eye of Broadbent, you’d be right to assume that the menu has a distinctly British brasserie feel to it, if such a hybrid exists. Think mussels in cider and beef and oyster pie, with those in search of a real feast able to order sharing dishes of suckling pig and game feast with all the trimmings. Sadly Brian Blessed is not included in the price.

As we have been so eloquently called ‘The Magpie Nation’ by Jamie Oliver, other culinary influences naturally find their way onto the menu too. Try a plate of the on-trend Jamón Pata Negra and I guarantee you won’t be disappointed, the luxurious lobster ravioli or alternatively the lamb rump with rustic panzanella salad, if you’re into big flavours.

Particular highlights of my visit were in many respects the most simple. Oysters always remind me of Anthony Bourdain’s iconic gastronomic awakening, and considering the non-coastal setting, the half a dozen that came to the table on ice were by no means a poor relation. Similarly, a large bowl of pappardelle with walnut and Taleggio blue cheese was by no means revolutionary in its composition, but in its execution – the sutble zing of the cheese against an earthy crunch and thick homemade ribbons – it was faultless.

Given its options, the dessert menu would be more aptly named the pudding menu, and despite seeing a deliciously retro banana split sail past my table, it was the apple and damson crumble that eventually caught my eye. Not a show-stopping grande finale for the keen cook, but a safe and comforting way to round off the meal nonetheless.

Whatever you choose at Eighty-Six, expect good presentation all round, an unpretentious approach to food and a reasonable distance from the neigbouring table, worth its weight in gold to anyone who’s considered using their fork to extinguish the world’s most annoying laugh. Following the success of their Club Coco in Verbier, co-owner Charlie Kearns and George Adams have created a destination that’s fun but not frivolous, which is probably just as well for anyone with a finely tuned appetite.