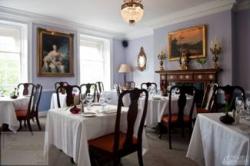 If you chose Hogg, aka Lord Hailsham, then good news; you can get a snoop around his former home when you go to Flavour by Scott Levi, at 5 Cavendish Square.

The noble Lord lived very high on the hog indeed when not on his woolsack, and his beautiful townhouse is something to behold. After his death it briefly became the Spanish Embassy and now a club, a boutique hotel and a restaurant  the latter being recently opened to the great unwashed.The usual clientele here, you see my dear, are rather well-off clubbers. Not rich like Lord Hailsham, but rich with new money. They radiate the look that comes from jetting between European capitals and sunny Caribbean beaches, they talk of fashion designers as personal friends and say’see you in Tokyo,’ the way you and I might say’see you in Croydon’.

So in Attenborough mode, D and I stole up the grand staircase, and then up a second not so grand staircase, in order to observe the exotic species in its natural habitat and discover what it eats.

The room lavishly overlooking the square, is divided into two halves  – one a library with books that no one will ever open, and one a slightly more intimate room with a cheerfully working fireplace. They are both undeniably pleasant spaces and a lot of fancy restaurants would be happy to have stages like this to present their food on.

And what of the food? The website promises a menu that’fuses understated luxury with Tuscan and French cuisine along with hints of the Caribbean’, which sounds like a terrible car crash waiting to happen. The actual physical menu is bonded to plastic, suggesting they won’t be changing it all that often. This is a shame as poor typography and spelling errors make it look rather cheap.

Scott Levi is the eponymous chef here and he’s worked for Jamie Oliver at Fifteen, at The Ivy and at Gordon Ramsey’s Boxwood CafÃƒÂ©. The menu is, as would be expected from a CV like that,  crowd-pleasing stuff; nothing you won’t have seen before and something for everyone including of course steak and chicken. There is no sign of the threatened Caribbean exotica, just Modern European.

Pappa al Pomodoro is a good simple soup, semi-porridgy in consistency as it should be, the bread is just slightly chewable releasing an umami hint of parmesan, while the rich tomato base is not acidic as it so easily can be. Best of all it hasn’t had the heart boiled out of it. It’s not the hardest soup to make of course, but that doesn’t detract from it being enjoyable and having flavour (sic). Classic Tuscan comfort food.

D has scallops with black pudding, again a dish that you can now find in many country gastro pubs, although I wouldn’t risk eating it there myself. One of D’s two scallops on the shells looks rather weedy, the last to be picked for games, but the other is plush and plump. The cooking is accurate on the scallops and the black pudding does Starsky to the scallops’ Hutch – a little bit of thick-eared rough to complement the pretty blonde.

My monkfish wrapped in pancetta is again accurately done, the pancetta hasn’t been turned into a piggy Pringle, it’s still soft but with texture, and the fish is spot on. Provencal vegetables, including thin twirls of courgette, are nicely on the dry side, not a sloppy mess. D’s buttery, bright fleshy Dover Sole he opts for served on the bone, a sign of someone who didn’t grow up eating junk food. How many people under 40 today know how to eat fish that hasn’t been made into a finger?

Rum Baba wasn’t as good as Ducasse’s but neither was it as expensive, I didn’t detect the advertised lime or chili in it which was a shame as I’m quite a fan of chili in sweet dishes. D didn’t fancy Fig Tar Tartan, unsure whether it was supposed to be a joke or illiteracy, but enjoyed his Amalfi Lemon and vanilla curd.

This place isn’t going to feature on any food blogger’s radar, or that of the hair-shirt bien-pensants either who will only knee -jerk sneer at it, but overall the cooking is culinary-exam mode perfect, and yes it does have flavour but what it needs to do is break out, to have fun and to risk being more creative.  Maybe even try some of that advertised fusion, of course no one wants to witness a car crash but it wouldn’t hurt Levi to loosen his seat belt just a little bit.