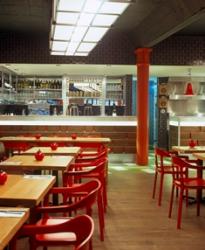 Close to Borough market and the Golden Hind is Clink Street, which gave rise to the slang term for prison, from the eponymous jail. The area has developed enormously over recent years, and has a wide range of cafes, bars and restaurants, the latest addition is Gourmet Burger Kitchen (GBK).

For those of you who are familiar with GBK, Clink Street is the chain’s 50th outlet and rather different from the norm for a few reasons, the most striking of which is that it offers full restaurant service, rather than ordering and paying at a counter, which is how it works everywhere else.

First impressions were positive: the room is quite plainly decorated sort of industrial chic, with wooden floor, plain painted walls and wooden tables, but vibrant red chairs add a splash of colour, the whole place feels welcoming. As we sat, we were brought a jug of water and glasses from a chilled cabinet, which we were cheered by; more places should do this, in our view. Bottled water is available, but what we drank was as good as mineral water.

GBK doesn’t do starters as such, but does have a number of small ‘while you wait’ dishes. Rather than overdo things early on, we decided to pace ourselves, and had a portion of spicy mixed nuts to go with the wine that we had ordered. It was a good selection, including cashews and almonds, they were nicely spicy, some with a hint of sweetness giving a pleasing blend of flavours.

On to mains, we felt that we really had to try the burgers, and here was another departure from the GBK norm: at Clink Street, some burgers come in two sizes: high rise (6oz) is the standard serving, and low rise (4oz) a smaller version. Our choices only came in the larger serving, but we were feeling up to the challenge. The beef burger with avocado and bacon had a generous helping of mashed avocado and some bacon: not the easiest thing to eat, but delicious. The beef was cooked medium, not necessarily my first choice, but the high quality meat really benefited from the lighter cooking, being served beautifully pink and juicy. For AK, the wild boar burger was very good, the boar having an intense, almost gamey flavour. This was cooked through, which is necessary with boar, but the burger remained juicy and tender.

To accompany the burgers, we shared a large side of very good chips, and three of the dips. The blue cheese dip was simple but delicious, with ground black pepper giving it a lift; smoked chilli mayo was fabulous, the smoky heat of the chilli really making it zing. By comparison, the sweet chilli, although nice was less interesting.

Desserts aren’t GBK’s thing, although there is Ben & Jerry’s for anyone needing an ice cream fix. Instead, to round off our meal, we both tried the flatwhite: a milky coffee, similar to latte, and absolutely delicious, it had a mellow strength that was great, a good way to end the meal.

There is a reasonable range of wines, all priced under £20, we were recommended the Little Beauty sauvignon blanc, it’s very well named, crisp, fruity and very refreshing. There are other drinks, of course, including some terrific milk shakes.

One of GBK’s great strengths is that nothing is set in stone, so if you want your burger without a bun or mayo, or with an extra topping, they’ll do it. Milkshake flavours can be combined (chocolate and Oreo sounded good to us), so there’s a lot of flexibility.

The service we received was very good, knowledgeable and attentive, which adds an improvement to the more familiar GBK experience.