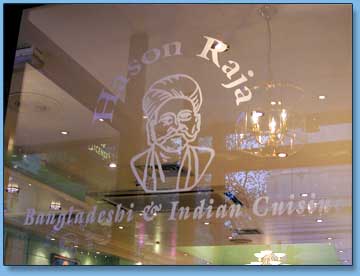 I haven’t had a proper curry in ages, ‘pwopper’ as Danny Dyer would use the word i.e. ‘this is a pwopper naughty boozer!’ These days it’s all fancy small dishes on slate, china and probably hand-beaten lotus leaf for all I know as Asian chefs go all out for fine dining acceptance. Seeing all these restaurants, and reading all the reviews, you could be forgiven for thinking the mainstream Indian had died out in favour of highly-priced places aimed at the sort of diner who drinks pricey wine with spicy food. Something in my opinion that is usually a pwopper waste of money.

So with a pint of draught Kingfisher nicely freezing my hand, the menu at Hason Raja looked reassuring. So did the room, a standard Indian restaurant of the late 80s with lots of light ersatz wood about and waiters in dinky uniforms. I asked one what he would recommend as a main course, ‘oh the chicken tikka masala!’ he said, quick as a flash. I searched his features for signs of irony, but he seemed completely serious. I suppose this being a bit of a tourist hotel area this may be the safest recommendation to make. We Brits are made of sterner stuff though and resisting a sudden urge to order ‘the hottest thing you got on the menu mate’ we settled for starters of Kalamari Pukthooni – squid tossed with Goan Peri peri, red-hot sauce with onions and peppers and Barwaan Baingon -aubergine coated with gram flour filled with cheese and herbs and fried. Oh and some poppadoms too, of course, which were served with some decent pickles, although not in the revolving tins, which I have always rather liked.

The squid wasn’t bad at all, tender and in decent quantity the sauce reminiscent of Chinese sweet and sour with chilli added. It wasn’t ‘red-hot’ though. The aubergine fritter things didn’t look too great; resembling hockey puck more than anything else they could usefully have been cut before service to make them more appealing visually. The taste was good though – the gram flour coating was smooth with that nutty chickpea flavour and the filling lightly spiced.

Looking around the menu for something a bit different I was drawn to the idea of Goose Ki Parchy – ‘French goose in an aniseed and poppy seed blueberry sauce’, but this was lunchtime and goose wouldn’t help me fly back to the office, more like waddle, so regretfully I moved on. Jungle Mache – ‘Richly spiced lamb, char grilled with aromatic whole spices, onion and peppers’ sounded reasonably unusual, Jungle not being a word you see often on Asian menus and Chef’s special Garlic Mugh Tawa ‘Chicken cooked with tomatoes and green peppers, finished with a touch of ginger and garlic,’ had its attractions.

As it turned out the Jungle Mache was pretty good, a nice depth of flavour with the chilli heat subtle in the background and just occasionally spiking through. I’m not sure the meat had been char-grilled first though, more likely pan-fried and the same could be said of the chicken which, despite having holes in the meat where a skewer must have been through, did not have a seal to it and could easily have been cooked entirely in the sauce. This reduced its flavour but the sauce was rich and the ginger and garlic not laid on so strong as to dominate the mix. Nan breads were very good, pillowy and light and the Sag Aloo was almost certainly made with fresh spinach and the potatoes were cooked to a nice collapsing point.

Rikki Gervais is said to eat her fairly regularly, but you never know with him and it could be simply part of his comedy of embarrassment, but I think not. This is an Indian that plays by old skool rules with mostly Bangladeshi dishes and it does the job well. Not fine dining but fill you up food with a subtlety that marks it out from more suburban ‘Indians’.

By Foodepedia7 May 2009Restaurant Reviews