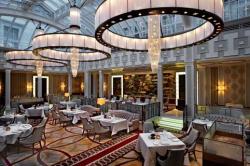 The tasting menu at this palace of wealth is £85 for seven courses but with seven matching wines, it’s £115. We have the wines.

So what do we get with our first course? A glass of champagne, the same stuff in fact that we were given as an aperitif, and which is still on the table. Brilliant sommeliership? I don’t think so.

Now all this is a real shame to report because there’s no doubt that the room is lovely, the service exemplary and chef Heinz Beck’s food is pretty good, although on the tasting menu you’d be hard pushed to hear his Italian accent.

Well he’s German of course but you know what I mean. There is a pasta course to be fair and it’s fantastic, but it comes late on the list and by the time it arrived I had rather forgotten I was in an Italian restaurant.

However the first course Sea bass wafer, tomato confit and avocado is very good, even if avocado is not exactly what I think of when I think of Italy. The crunch of the wafer against the almost raw sea bass is great contrast and the tomato, which I’d like to think was a plum one even though it was probably a cherry tomato, had been reduced to its flavour essence. Superb.

Scallops, amaranth and black corns looks ugly on the plate; the scallops have been sliced wafer thin and appear limp, grey and unappealing. To think some poor fellow dived for this. Flavour wise I miss the searing every scallop should get, but the amaranth is fun; a grain that is tiny and tastes rather like pop corn. Foie gras, cereals and mushrooms consommé to follow is good too; the mushroom consommé well flavoured with rich porcini and the grain turns out to be quinoa, which the waiter persistently mispronounces as if doing it for a bet. I like quinoa a lot and it’s nice to see it escape from Holland & Barret and make it all the way to a Michelin starred chef’s dining room. Foie Gras though is not terribly Italian and quinoa is from South America

Ah but here’s what I’ve been really waiting for, some pasta. Carbonara fagottelli, little ravioli-like parcels that the waiter advises you put into your mouth whole. He’s quite right, if you spear them with a fork, all the lovely liquid will run out. They are creamy and delicious and taste of smoked bacon, although one should really call it pancetta of course. It’s a reconstruction of Spaghetti Carbonara that works superbly. Why can’t all of the tasting menu speak fluent Italian like this?

Dover sole and fine herbs was just what it said on the menu, delicate and subtly cooked fish fillets. Being rather more used to a whole sole landing on my plate, this quiet and refined way of working the fish was a pleasant surprise. Few fish can co -exist with delicate herbs and Dover Sole is one of them and despite my complaints about lack of Italian accent earlier, I was happy to eat a local fish on this occasion.

After that comes my bugbear, the one that appears on seemingly every tasting menu – lamb. This is surely the hardest meat to eat when feeling a bit full and it’s generally not to my liking. So full marks to Herr Beck for creating a lamb dish that I could have eaten much more of – Lamb crepinetté, aubergine and spinach. A crepinette is basically a sausage, made of ground meat with spices and normally wrapped in caul fat but to be honest I would never have worked that out on the basis of what we ate. It seemed a solid piece of lamb, perfectly cooked and jammed with flavour.

And so dessert – Setteveli, chocolate and hazelnut. Sette Velli (to be precise) is Seven Veils, a layered cake of heavenly delight. The Tuscan inventor won a prize for it back in 1997. It’s worth a prize, especially when plated up so beautifully, for once I wanted to do the blog thing and take a picture but that’s rude behaviour in McDonald’s, let alone in Heinz Beck’s.

We left Heinz Beck’s after paying £610 for four people – far too much even for food this good. Outside the door was a Ferrari Enzo costing about $670,000. It could just have been a Russian oligarch’s, but I think perhaps it was just Heinz’s.