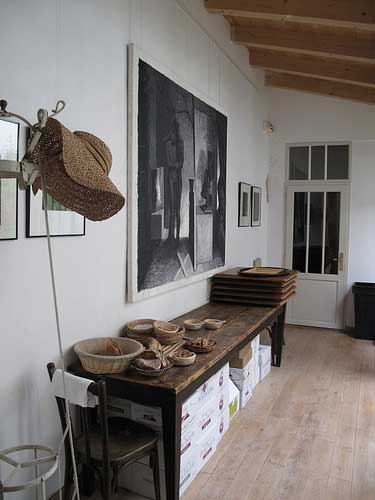 ’16 Euros to cross a bloody bridge?’ I shouted incredulously at the mec manning the toll booth as he gazed back impassively. No doubt the sight of a middle-aged Englishman having an apoplexy over the entrance fee to the Île de Ré was becoming rather familiar to him.

He shrugged Gallicly. It wasn’t his fault that this time last year 16 Euros was equivalent to about £10 while now it was almost exactly £16. ‘Blame Gordon Brown and the people who voted Labour,’ he advised, or something like that. I couldn’t hear him anymore because of the roaring noise inside my head. ‘This had better be one hell of a lunch,’ I grunted to no one in particular as I ground the hired Peugeot’s gears furiously in a personal statement of defiance to Sarkozy.

Once over the bridge and bouncing over the most speed humped roads in Europe I tried to relax while my head regularly cracked against the roof. The French don’t build speed bumps the way we do – in order to penalise plucky small car owners while allowing fat 4×4 drivers to zoom along with impunity – no, these are the full road width and with sharp edges. Go more than 20mph over them and you can kiss goodbye to both your suspension and your car hire deposit. Given that my tiny Peugeot 107 had cost £170 for a week, I could ill afford any more costs or delays on this particular jaunt. My destination was the north end of the island, the capital port of St Martin de Re, and it was already hard going what with the hundreds of cyclists that infest the island at this time of year. 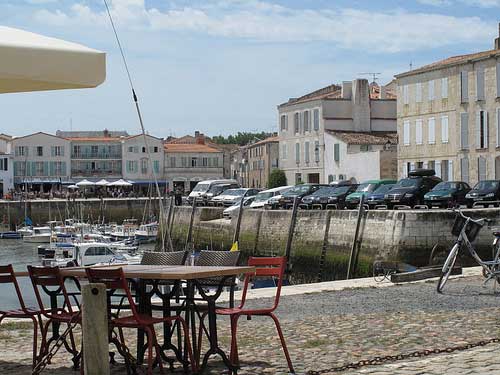 The Île de Ré is a beautiful place but, just as in Cornwall, the summer brings blue skies along with crowds of trippers to obscure the view. The ports have had most of their cute houses turned into shops selling Francophone versions of the tat you find in Penzance, while the harbour side restaurants are home to red-skinned French families eating bucket loads of mussels and chips. I wasn’t aiming for one of those however, I had a reservation at somewhere special, L’Avant Port, and it was getting dangerously close to lunchtime.

The tiny 107 came into its own when I did finally hit the little lanes of St Martin de Ré proper. French parking habits meant that cars were either strewn carelessly across pavements or were straddling corners in ways that defied commonsense, let alone traffic regulations. Spotting a gap only slightly narrower than my car I carefully nudged the neighbouring vehicles aside until I was snugly tucked in, then crawled out of the rear window and set off for the restaurant now visible across the harbour.

Visible but not yet attainable, someone had foolishly put a load of sea water in the way in order to allow boats to come and go. After only a sweaty ten minute detour in the other direction I finally sat down with a view of the harbour, a carafe of tap water and a bottle of chilled rose in front of me. At last, lunch. I had damn well earned it I reckoned.

Lunch here is just about affordable – 25 Europounds for three courses. A la carte is less so with a simple monkfish dish coming in at 28 Europounds, a price that would cause a sharp intake of breath in many a top London place and this is supposed to be a Bistro.

Michel and Nagat Azemar are the owners of L’Avant Port and they have made a very stylish place of it, the décor and colours muted and tasteful. This along with the prices attracts a more glamorous clientele than the restaurants across the water. The man sitting near me with his large family exuded Parisian arrogance, while his kids had the thick hair and fine bone structure you only achieve through decades of careful bourgeois breeding. Many rich and famous people have holiday homes on the island; you can spot them by their bicycles. Tourists have nasty new ones, regulars have battered bikes that have seen years of service in the family.

Fish here is, with few exceptions, caught for the restaurant by the small boat that Nagat indicated to me nearby. Each day’s menu is therefore variable according to what’s been landed. Today a starter of vannets with a citrus salad was remarkably elegant with the vannets, a variety of clam, neatly popped out of their shells and set in a ring a roses around an island of lettuce, all punctuated by pieces of clementine. The sea fresh sweetness of the vannets was beautifully balanced by the citrus dressing, but annoyingly I did crunch on bits of shell every now and then. 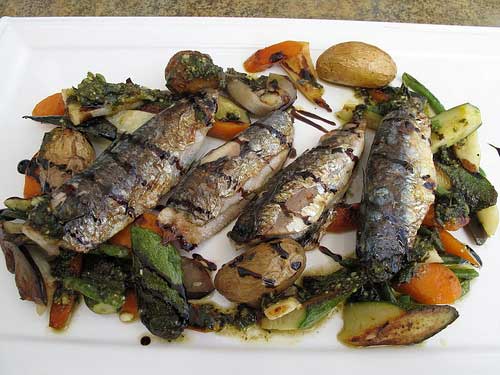 Chef William Warnaul is big on cooking on hot steel plates and nothing else, so it was no surprise that a main of sardines was as simple as could be, the squeaky fresh fish gutted, beheaded and de -tailed then seared to crispy skinned perfection. Trails of balsamic vinegar cleverly reproduced the missing sear lines. The vegetables, all locally sourced, had been cooked the same way so that the small potatoes had wrinkled skins and deep flavour.

I had to try some Aigle Fumee too, because to my schoolboy French it meant Smoked Eagle. Next to Roast Panda, this seemed about as un PC a dish as is possible to get, so I was a bit sorry to find that someone had just spelt Anguille wrong, which is the French for eel. It was rather delicious though with the flavour of a fine camp fire, and came with some more of the grilled vegetables plus a salad marked by the sort of great vinaigrette that seems easy but is so hard to reproduce. Crusty sourdough bread soon mopped up the last of that.

Dessert was a triumph of style over substance; I ate it in a few bites. A ‘ravioli’ of pineapple with strawberries; in effect a waffer thin slice of the anana draped over a strawberry filling, plus a teeny bit of vanilla ice cream. It was undoubtedly elegant but at nine Europounds an expensive ninety seconds of pleasure. Add your own filthy comment here if you like.

I wish I could say I staggered replete away from this somewhat staggeringly expensive meal, but the truth is I eyed the moules et frites that I passed en route back to the car hungrily. Squeezing back through the car’s window with relative ease, when I had hoped to be forced in like a fat cat through a flap, I felt a tad disappointed. As I reversed out, setting off all the neighbouring car alarms in the process, I thought that it wasn’t just the man on the bridge who was overcharging the poor tourists.

L’Avant Port can certainly cook all right, but at Paris prices. Right now we Brits may be better off haggling at home in Hastings. The fish can be almost as good and you don’t get charged an entrance fee either.