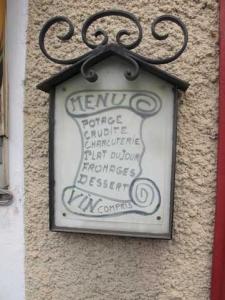 Service is a bit slow at Le Coup Franc and Madame emerges crablike from her kitchen at back, separated from the dining room only by a tattered screen of what once were cheerful multicoloured plastic strips, but which are now Airfix Battleship Grey.

Bent double under the weight of the tureen of soup she’s carrying, she advances to the table like Mrs Overall of Acorn Antiques. ‘Bon Appetit, Mesdames Messieurs,’ she croaks to no one in particular, setting her burden down carefully before retreating to her lair, still bent double. A lifetime of running a small bistro has taken its toll of her spine.

The menu here is simple; there isn’t one. Sit down and take what you’re given – five courses and a litre of red table wine, chilled, as is the fashion, for 12 Euros. The restaurant is also a bar and, somewhat eccentrically, a fishing tackle shop too. Racks of bright floats, fishing reels and rods have to be negotiated before you can get to the few tables on offer. Arrive much later than 12:15 and you won’t get a table at all.

This is not a restaurant catering to the gourmet, but one which exists to serve the local working man. Most of these are already seated, dressed in the fluorescent orange dungarees that indicate they are road menders, sweepers, hedge cutters or one of the many other municipal workers the state employs to keep France clean and tidy. They greet each other by proffering their wrists not their hands, hands being of course dirty with an honest morning’s toil.

The soup, which you serve yourself, taking as much or as little as you want, shines with slicks of oil. The stock may be home made but more likely it’s from Monsieur Knorr. Bobbing about like survivors from a shipwreck are shreds of vegetables and unknown meat, the latter almost certainly the remains of yesterday’s lunch. The soup is salty, thin and stimulates the appetite, as do the aromas wafting from the kitchen, adding another layer of patina to ancient walls last papered when the SS ate their lunches here.

I have two refills of the soup, while stuffing my cheeks like a hamster with crunchy baguette taken from a bottomless basket. If at any time the base does become visible unseen hands whisk the basket away and replace it with a full one. The red wine is nothing to write home about, but no Uriah Heep of a sommelier could convince me that anything else would be more suited for this meal.

Madame slowly takes the tureen away; a large man with hands like shovels and fingers like Picasso’s has collapsed into a chair at the next table and needs feeding. I’m happy to keep on shovelling bread while waiting for the next course, a large plate of sliced meats and a couple of the gherkin’s fey little brothers, cornichons. The meats have been lovingly selected from the local meat traiteur who….. no of course they haven’t, get real, they’ve come from the supermarket of course, Madame has to make a profit on the 12 Euros after all. 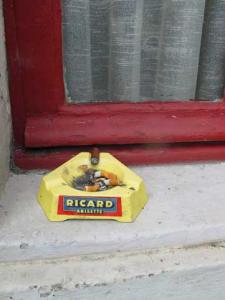 The main course is too much for Madame to carry so a woman with a Kaiser Wilhelm moustache is sent out with a pot of stew. ‘Dinde!’ (Turkey!) she answers to my question with the sort of scorn reserved for customers who ask such things. Also in the mix are new potatoes, carrots and green beans all held together with a viscous sauce that is blisteringly hot from the stove. It’s filling, as it’s designed to be.

And then comes the cheese board. Not on a ‘chariot’ and not accompanied by a waiter who wastes valuable fromage-feasting time by pointing at each one and describing it. I pick three quickly, other tables are waiting – a fine Comte, a nicely aged Goat’s cheese and some Roquefort. I could have more, but three is the polite number to take.

Finally a Cornetto is produced from the fridge. I haven’t had one in years and, as it’s included in the price, why not? It gives me brain-freeze and so I have a small coffee to melt the pain away.

This is not Peter Mayle’s Provence and this is not the ‘wonderful little place’ that Giles and Samantha found as they toured the Dordogne last year, as Giles fielded emails from the office on his Blackberry and Samantha collected fabric samples for her shop. This is the France the French see – plain, simple, cheap and quite cheerful. ‘Bon appetit!’ indeed.