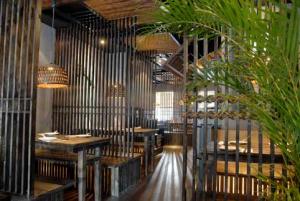 The dish of tongues is speaking and we’re playing deaf. S and I are trying not to look at the grey curls of muscle, the Sichuan duck tongues, that S has ordered. They are arch and taut, twisted in a last quacky screech and hold horror in their sinews. And they are cold. And, in the ultimate diss, they are sprinkled with sesame seeds.

Of course, this makes us hypocrites, a fact we’re bitterly aware of. Willing to eat duck but appalled when they cry. We’re at the newly-launched Leong’s Legends in Bayswater, part of the Leong’s group. Apparently it’s Taiwanese food but the menu has lots of Sichuan Chinese and Japanese. It’s almost like they’re too scared to unleash the full Taiwanese repertoire on Bayswater’s diners. But the tongues aren’t scaring the waitresses: ‘My favourites, quack, quack, quack,” says one.

The tongues weren’t the only hiccup. We were given, on our first order, pork and preserved egg congee instead of the oyster. And someone could have warned us of the superbowl size when we’d expected a starter. Then the pearls in S’s iced pearl tea kept jamming up the skinny straw.

The kung pao chicken with dry red chillies and peanuts – Sichuan rather than Taiwanese – looked stunning with chillies like bloody swords guarding the plate. But the chicken was pappy and tasted pre-cooked, sadly spoiling the dish.

Things got better, however. The wrong order congee turned out to be quite good for a porridge of black, preserved egg chunks that looked like eel with the texture of bladder skin.

We had tasty won tons full of soup called Legends siu loung bao, little herby pork balls floating in a doughy parcel of soup. Sadly, some were leaking, but they were cosy and hot in the mouth. ‘Normally you have the wontons in your soup rather than the soup in your wontons,’ said S, sagely.

The belly of lamb in spicy herbal sauce tasted a bit Indian – so I quite liked it – although someone had been jelly-fingered with the salt and tipped in too much. The lamb was mainly postage stamp-thin on squares of bone or fat but still pretty tasty. The aubergine with mashed garlic with tao pan sauce was the best thing, freshly cooked in buttery oil.

Fascinating, though not to my non-Taiwanese taste, was the pudding. The bean paste cake was nothing like I expected, appearing as a transparent, wobbling heart-shaped jelly that tasted of nothing. Into this, green soya beans had been spiked, like cloves into a medieval pomander. The flavour improved when scooped into the dish of condensed milk accompanying it.

Prices at Leong’s won’t scorch your pocket. Mains are around £7 and smaller dishes very reasonable at £4 – all generous-sized portions too. The diners are graciously separated by black wooden grills except at the back. And there’s lots of stained pine, exposed brickwork, wicker and general brownness going on.

But all this is diversionary. I write, I write but the truth is, I am still haunted by those beaky duck tongues. Please, stop the quacking.