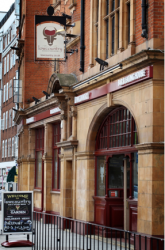 Americana has percolated the London dining scene in a big way. ‘Authentic” US diners are
everywhere knocking out burgers and ribs to wave after wave of willing London scenesters. The danger of this, aside from bolstering national obesity figures is that American food is being broadly tarred with the same BBQ sauce soaked brush. This is why Lowcountry Bar & Eating House in Fulham which promises an ‘education” in ol’ time Creole cookin’ from its namesake region of South Carolina, is such an interesting prospect.

Inside, horseshoe shaped booths provide real intimacy for some lucky diners, although a lack of distinct dining and bar areas means those eating at regular tables may feel a little exposed amidst post-work drinkers. The sheer scale of the place prevents it from being a cosy space but rustic touches like a cart wheel chandelier and exposed masonry give a certain Walton-esque quaintness. Smooth jazz and soft rock provided a mellow backing track to our meal which mixed with the sound of easy chatter to make for a warm and relaxing atmosphere.

For all its billing as the antidote to stateside fast food culture there are a surprising number of dishes that you would expect to see in most American eateries: Ribs, burgers, fries etc. However, a view of live seafood in the open kitchen and terms like ‘succotash”, ‘corn bread”, ‘grits” and ‘biscuits” reassure you that you are in for an authentic culinary experience of the American south.

My starter was She Crab Soup. I was expecting creamy American chowder, so was slightly disappointed when presented with a thin and peppery broth that didn’t really deliver on flavour. The crab itself though was outstandingly fresh and succulent and impressively presented -protruding as it did from a tin pail like the sinking bow of the Titanic.

My partner, Ariane, started with the Cob Salad. Comprised of a lonely quartered boiled egg, impossibly small bits of bacon, a mass of leaves and an overpowering blue cheese dressing, this represented the meal’s lowest ebb.

Things looked up though when my main course, Shrimp and Grits was delivered. The grits (like a coarse polenta) provided an unctuous creaminess which slowly dissolved to give way to tiny crunchy flecks. The fabulous accompanying prawns exploded like meaty fireworks between the teeth. Deep fried onion bits gave an additional depth of flavour and had they been a little crunchier, they would have provided yet another dimension of texture.

A piquant tomato sauce ripped through the plate which worked with the creamy grits but interfered with the sweetness of the prawns. Despite clearing my plate, I found I had eaten the dish like an obsessive compulsive might tackle a Muller Fruit Corner, best bit first….

Ariane’s Seafood Gumbo came in a characteristic dark sauce that had a good thick consistency and a pleasant squid ink kind of flavour; but there was a notable absence of okra and Creole spice- flavours which to my mind define gumbo. The accompanying jasmine rice packed a delicious punch of smoked paprika that lifted the flavours of the sauce considerably when eaten together. It was what lay beneath the surface of the sauce though, that defined the meal: the freshest crayfish, whole lobster claws, smokey Andouille sausage and crabmeat packed the dish and all were executed perfectly.

For dessert, Ariane’s pecan pie was good and generously filled atop a flaky buttery pastry. It was served with lemon syrup and brandy soaked cherries that made the whole thing taste like a boozy Christmas cake.

We had supped on grassy Sauvignon Blanc throughout but I had craved a light red to complement the smoky spiciness of the meal. So I was pleased to finish with an outstanding pinot noir and raspberry sorbet. The flavours were balanced beautifully; refreshing and challenging every square millimetre of the tongue, prompting it to dance the Charleston in my mouth.

Generous portions, fresh produce and warm hospitality are all traits of American eating and Lowcountry delivers these elements in spades. The sheer quality of ingredients distinguish Lowcountry from most American restaurants in London, but some of its dishes- despite their evocative names – lacked a quintessential punch of Creole flavour.

Lowcountry has potential to be more than a sophisticated alternative to the American Diner scene; it could just prove to be a gastronomic ‘education” in its own right.