Fleet Street isn’t what it was. As much a legend as a street, it was always shorthand for journos getting stories, getting drunk and getting laid. For finding news on the street and not rehashed from Google.

Walking down Fleet Street today you wouldn’t know it. The newspaper offices are now just offices, the bars and pubs quiet, smoke-free places for quiet, smoke-free people. Only the giant clock outside the old Express building seems to be intact and I’m not sure that it’s even telling the correct time.

There’s probably a clever metaphor there, if I could only think of one. Damn you Twitter, you’ve shrunk my mind as well as my attention span.

Opposite the clock is a building once used by the mighty Reuters news agency. Reuters always seemed a bit strait laced but they did have two pubs in the building back then for thirsty newshounds, now there’s a bar and a restaurant – Lutyens

Sir Edwin Landseer Lutyens, OM, KCIE, PRA, FRIBA and now of course RIP, has given his name to a restaurant by prescott and conran who also created Albion and Boundary.

Lutyens designed the original building in the 1930s and Prescott and Conran have designed the new restaurant. It’s all you expect from Conran. Everything is ‘just so. You can imagine Conran coming through with a slide rule and spotting if anything was a millimetre out of line and primly putting it straight.

Pass through the outer bar area, which for a scary second you assume to be the actual restaurant, and out back you find the restaurant proper. Conran’s trademark open kitchen is there, as well a seafood bar adorned with expensive shellfish. Terry sure does love his crustaceans and no doubt the beady-eyed lobsters love him back. 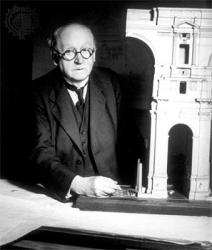 We have come on a dining mission, to see if the ‘menu compris’ can deliver a deal with three courses including wine (37.5cl) water, coffee and petit fours for ‘just’ £39.50. Given how much some places charge for water alone it sounds like a good deal, but perhaps it’s also Michelin Impossible.

Ah but when you look at the menu you can begin to see how they might do it. Oysters, terrine, smoked salmon and asparagus in Hollandaise sauce are the starter choices and only one of those needs cooking. That has to help keep things simple and reduce costs.

The salmon is Loch Fyne and very good; thicker cut than usual but I like that and it’s very fyne salmon too. Salad is drifted around the plate in order presumably to ‘big up’ the dish, but doesn’t really work and is rather reminiscent of a hotel dining room’s tarting up tricks. P’s Ham and Parsley terrine is tasty, well made and well-seasoned but the plate’s too large – the gherkins that are already rather small look lost and roll about like jelly beans.

No real complaints about these actual dishes though, they fit the price point even if they don’t make too much of an effort to go the extra mile. Maybe mains will try harder.

Rabbit wrapped in ‘bacon’ and oven-roasted is not a million miles away from my own home dinner staple of chicken wrapped in prosciutto, but being that this meat is a bunny it enters a higher league. The meat is nicely moist, rabbits can dry out easily and the wrapping of now crisped ham helps prevent that. It’s a good dish for the money and I imagine easy for the kitchen to pre-prep and get into the oven on order.

P has poached cod in a broth of spring vegetables, which bob about cheerfully like ducks at a funfair gallery. Personally I find poached cod too reminiscent of hospital food, but P thinks it’s good girl food as it has almost no calories to speak of. She finds the fish nice but a little bland and I have to suppress an ‘I warned you about that’ as I wave the bunny bits about. Fry me to the moon every time when it comes to fish.

A crème brulee is another classic made in advance to make things easy and it’s perfectly okay, as they always tend to be. St Emilion au Chocolate seems to be just a slice of chocolate cake and not all that exciting but it’s not bad either. 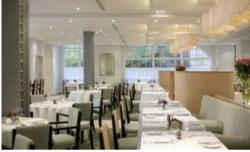 We combined our entitlement each of 37.5cl of wine into a whole bottle of Cotes de Roussillon, but we could, and perhaps should, have shared one carafe of white and one of red. White wine with fish, as mother always said.

Service is smooth and posh but the room rather large for the fairly small number of people in it. I suspect Lutyens does very well at lunchtimes, while evenings the bar sees more of the action. This is normal for the area.

I’d like to see what chef David Burke can do a la carte; the constrictions of keeping to the £40 line are perhaps too much to handle given the overheads of a place like this. That said the Lutyens meal deal is a fair one, nothing stunning but perfectly ok and you get to eat in a classier place than you deserve for the money.