A chicken shop roosting on Beak Street? Coincidence or incredible planning? Nick sticks his beak in. 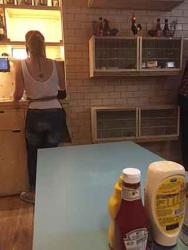 I’m not sure about the decoration here in Ma’Plucker; there are empty chicken coops fixed to the wall. I’m far from being a veggie, but like a lot of people I am not too keen on being reminded of where my meat comes from; I gag a bit at meat counters, even as I salivate, and once a French butcher brought out a whole lamb in order to saw the leg off in front of me. I could have done without that, to be honest.

Anyway, my Morrissey moment aside, the decor in chicken shop Ma’Plucker (geddit?) is brand new and shiny and there is the distinct smell of freshly sawn wood in the air. Which adds to the coop vibe rather. It’s all bare bones and bum-unfriendly stools with a menu blackboard on the wall and puns aplenty all over the place.

Chicken has of course been up (or down) there with burgers and pizza as mass-market cheap food for a very long time. KFC, Maccy D and Pizza XX (add name here) have all been demonised by upper echelon eaters as the root of all dietary evil.

Well we all know burgers have been rebooted and pizzas pimped to make them both acceptable, but chicken not so much so. The image is still largely that of dodgy places serving dodgy food to dodgy people who throw the bones all over the bus.

Ma’ Plucker is inspired, so they say, by Deep South cooking. That doesn’t light my fires, as when I think of Deep South I think of banjos, incest and enormously fat men shovelling down massive lumps of meat cancerous with smoke. 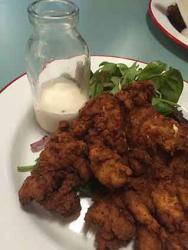 No doubt though that they’ve been doing it a long time down there, long enough to have a good grip on the techniques, so what do we have here?

First choose from Salad, a House Bun, or, a Maple Waffle. The last I recoil in horror at even the thought of; what is wrong with people? I go for salad. Then choose Chicken Skin Gravy, Chipotle Chili Sauce, Kansas BBQ, Herb Dressing, or Maple Chili Glaze. With a vaguely virtuous mind I go for Herb Dressing while E has the gravy.

Then meat, Chili Rubbed and Roasted Rotisserie, Crispy and Coated Buttermilk Dipped, Slow and Low Spicy Pulled, in various portion and type choice and sizes. Abandoning health, I go for fried breast. I know breast is not best, but it’s what I like.

It comes in a basket, natch, and is pretty good. Not quite as crisp as I’d like but the meat is well cooked, moist and safe, but the dressing in a bottle is slightly bland. I didn’t want to drown the chicken in over-spiced sauce like some mug punter, I wanted to taste it, but this dressing is just a bit too lacking.

E likes her chicken thigh, reporting that the gravy is indeed very redolent of chicken skin and her meat is, like mine, properly cooked and moist. She thinks the fries a bit flabby, but I rather like them myself. The collard greens we both agree are under seasoned, while the corn on the cob is very good in itself, sweet and buttery, but the promised lime is not showing up quite enough. 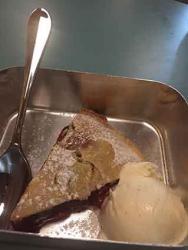 Other people’s rotisserie looks tempting, as I take it in with sideways glances, great colour on it and from what I could tell pretty spot on meat. Quite why you’d order a bun with a chicken leg is unclear, but some people seem to do just that.

It’s not quite for me, this kind of place, I’m too old really, but I get the idea of fast (ish) food of higher quality and I can approve of that of course. I wonder if it’s going to get the hipsters and bloggers in a flap though?  Probably not, as they are all still queuing to get into Bao, but I’d go again and that’s an endorsement I rarely make.  Must fly.