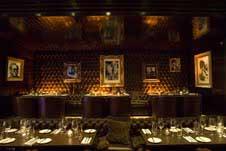 A kind of theme bar, McQueen in Shoreditch is named after the craggy actor (Ã¢â‚¬Å“Steve’sÃ¢â‚¬Â wouldn’t have quite the same effect). Style wise, we’re talking tobacco-dyed Chesterfields vying with mirrors and gilt to outdo the 70s chic. But it is more a take on The Thomas Crown Affair than Steve McQueen. And there was, said A, Ã¢â‚¬Å“no reference to Virgil Hilts or Bullitt, save a sole monitor running Le Mans with the sound turned offÃ¢â‚¬Â. Glad he knows these things, I’m better with Dinner Date and Doctors Ã¢â‚¬â€œ both of which featured at McQueen in some fashion.

OK, not doctors, unless they were dining. Or dating. But the dimly-lit restaurant was full of smart, well-groomed couples, discernibly new and awkward, either slithering derrieres or snapping over the bill. There was also a pumping club downstairs which can be hired out by promoters. This seems the main draw; when we peeked into the lavish front lounge, it was teeming with more smart 20-somethings sipping grand cocktails. Sadly the music, sort of housey, would have left Steve cool Ã¢â‚¬â€œ he’d probably have preferred a Lalo Schifrin score. So the similarities with Steve McQueen were, I’m afraid, tenuous.

But what of the food? I don’t think there was much claim to emulate Steve’s cuisine apart from the impressive selection of American Angus steaks. Head chef, Nehanda Campbell, is only 25 with a family originating from Grenada in the Caribbean whose cheffing plaudits include time at Gordon Ramsay at Claridge’s and stints at Ristorante Semplice, L’Autre Pied, Simpsons and Maze.

Anyway, cocktails, I hear, are for stars so that’s what we started with. There was a massive selection and I saw these were pretty popular. We tried a Raspberry Collins (Bombay Sapphire with, as you might expect, raspberries) and a Hunter (Ron Zacapa-Bacardi infused with Caribbean herbs and thyme syrup), following a different kind of bounty.

Our starter of zucchini fritters was heavy on the Parmesan but too well done for our tastes. A pity, as the flavours worked well together. The fig, goats cheese and Parma ham salad was fantastic but the crab salad was disappointing – the flavour of delicate flesh was lost in the soapy, strong taste of fennel/aniseed.

Moving on to the mains, and despite the steak abundance, we both got fish Ã¢â‚¬â€œ which were superb. Halibut Ã¢â‚¬â€œ a usually strong-tasting fish Ã¢â‚¬â€œ was feather-soft and buttery. It came on a bed of baby leeks and asparagus, served with a herb gnocchi. The flesh was complemented well by a ginger vermouth jus but the leeks were a touch stringy. The crisped sea bass was equally well cooked, served with wild rice, broccoli and a cauliflower purÃƒÂ©e. However, this was less finessed, the rice being more than a bit al dente.

To accompany dinner, we’d chosen a Michel Torino Malbec and a Sangiovese Merlot house wine, the former a voluptuous and plummy dry red, the latter disappointingly acidic, with too much tannic aftertaste and Ã¢â‚¬â€œ said A Ã¢â‚¬â€œ disinfectant.

To finish, the rhubarb cheesecake was more of vanilla custard – sweet but could have done with more of the tartness of the rhubarb confit coming through.

Overall, it was a stylish night out but a little expensive given how much of the food was slightly wide of the mark. However, there were some flashes of excellence and if you’re looking for a whole evening experience Ã¢â‚¬â€œ club and chow Ã¢â‚¬â€œ then this place could certainly work. Paraphrasing Bullitt, Ã¢â‚¬Å“you can sell whatever you want, but it wasn’t all sold here tonightÃ¢â‚¬Â.