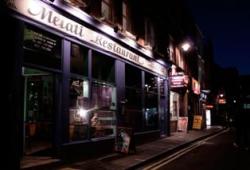 This popular Malaysian restaurant has been in business for some 30 years now, set in Peter Street, just a few yards along from the junction with Wardour Street, Melati has an informal feel about it, in part through its utilitarian style furniture, but it also feels like it has grown and developed over its three decades in business. Somehow the eclectic mix of furnishing and artefacts comes together well and creates a comfortable atmosphere in which to dine, encouraging you to relax. We got there on a midweek evening and half expected to see customers having something to eat before dashing off to see some play or musical in one of the theatres in or around Shaftesbury Avenue, it wasn’t the case, most of their customers were there for the evening.

Melati’s menu is quite lengthy and with lots of interesting sounding dishes on it. It was suggested to us that we had the Melati Platter as a starter as we had not been there before, and we agreed. The platter came with five component parts, crispy spring rolls, some tender skewer of chicken and lamb with a separate satay sauce, king prawn fritters and sesame prawn toasts, with a spicily hot sauce to accompany them and crispy seaweed, these were all good and delivered exactly what you would imagine and we were expecting.

We were much more adventurous with our mains, having chosen three meat dishes, one vegetable and one rice dish. Had we known the size of these we would have held back somewhat. Anyway, to those dishes. The Ayam Assam Pedas (chicken in a spicy tamarind and lemongrass sauce) was a bowlfull of tender little chunks of chicken breats sitting in this tangy, spicy sauce that had a little chilli heat. The Kambing Chilli (marinated lamb cooked in a sweet Indonesian soy sauce) was a little hotter than the chicken, and its sauce was thicker just coating the meat and some al dente pepper and onion slices, this was a more challenging, but vibrantly tasty dish. The Udang Bawang Putih (prawns with crunchy garlic and chilli) was my favourite, the coating on the prawns had a crumbly crunch to it, well flavoured but allowing the prawn so shine through it was given a touch of heat by some finely sliced green chilli. The vegetable dish was Tumis Terong (aubergine cooked in a tamarind gravy with dried anchovy) which was a good accompanying dish, the aubergine retained its texture having been cooked well, and the tangy sauce was given depth by the anchovy. To go with these we chose the Nasi Goreng (special fried rice with shreds of chicken, prawn and peas) some people eat this as a dish on its own but it works equally as well as a side dish, the rice having been given a good depth of flavour from its second cooking and having the additional texture from the added ingredients, we thought it went well with our choices. These were all good dishes with some zingy flavours coming through that gave our mouths a bit of a work out.

No prizes for guessing, we absolutely had no room for dessert, even though a few dishes caught my eye! We had well over ordered on mains.

Wines at Melati start at just under £13 a bottle for house, we had a Chilean Sauvignon Blanc, which had a dry acidity and fruitiness that we felt worked with the range of dishes we had chosen. Service during our meal was very good – the staff there are very helpful. Melati is a short walk from west end theatreland, and is a great place to grab a tasty meal before the curtain goes up, or to meet friends and have a relaxed informal meal, particularly if you are excited by mouth tingly zingy dishes, we enjoyed it.