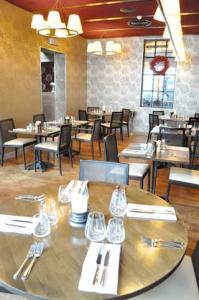 The evening didn’t start well. Not, I hasten to add, due to any fault of the restaurant to be visited. We made the mistake of ordering a glass of wine in the nearby Harwood Arms, £10.50 a pop. Ouch. Is it cheap to think that we might be warned before the glass was poured? I suppose we can’t really blame the bar staff, we asked for a recommendation and judging by the crowd; all gilets and loafers, this was in line with the mean income. The food did look great though and the place was booked out so I guess they must be doing something right.

After putting a lot of effort into savouring the most expensive glass of wine I have ever purchased in a pub, we made our way to My Dining Room. Located behind Fulham Broadway, on an unimposing road, is the solid red brick building that houses the recently refurbished restaurant. Upon entrance you are greeted with warmth, not only from the tables festooned with candles and the blazing fireplaces in the hearth (although they alone were enough to make me regret the cable knit jumper) but the inviting atmosphere. The décor is homely and relatively chic, my only gripe being the wallpapered feature wall, slightly too Lawrence Llewellyn-Bowen a la 1996. The glasses and napkins were stylishly simplistic. The restaurant itself, like most, benefits from being full. On arrival the place was quiet but filled out during the evening creating a relaxed buzz. There is a bar area at the front where you can eat or just drink and inviting lounge areas for, well, lounging.

The concept at the heart of My Dining Room is to be found in the menu under ‘home dishes – dishes to be shared by the table in the manner of the home meal.’ Mains such as whole sea bass and pie of the day serve this idea well and on the whole it works, creating a convivial, relaxed atmosphere. You could complain that it takes away some of the pleasures that eating out brings; picking exactly what you want, negotiating a few mouthfuls from other’s plates and smugly tucking into what was obviously the best choice. But then if the idea of sharing really doesn’t float your boat you can always go a la carte.

Overseeing service was My Dining Room’s devout proprietor, Olivier Lavigne de Cadet. Gliding serenely around the restaurant wishing diners ‘bon appetite,’ he was on hand to answer questions from curious reviewers. Olivier speaks warmly of the concept and has the knowledge of his produce that breeds reassurance in patrons. Head Chef Julian Marshall, formerly of Mosimann and The Lanesborough hotel, has designed an interesting, cohesive menu (apart from one gastro-squatter; Pad Thai).

To start the shared traditional terrine worked well. Served in a large enamelled dish, we were encouraged to take as much as we could handle. The hearty chunks of meat were compressed with carrots, onions and mustard seeds; packing a good punch. The terrine was served with bread, which would have been nicer warm but was none the less craggy and delicious, and a neat little pot of pickles. If anything it could have done with something moist, some kind of chutney or even butter would have made it more palatable. Other options included a sharing Charcuterie board or, from the dark side of the menu, (also known as the ‘al la carte,’) more traditional dishes such as soups and things on toast.

Main courses saw a return to My Dining Room’s al la carte menu (after a small dispute; I wanted to share the pie but the less said of that the better). Salmon and Haddock Fishcakes were classic nursery fodder. The generous sized patties sat atop a bed of emerald green samphire. Samphire always raises a smile, taking me back to summers spent in Norfolk, maybe these hazy childhood memories cloud my palette but to my mind samphire should always be drenched in vinegar and a liberal sprinkling of salt and pepper. Sea side flavours might have come in handy here as, whilst the salmon and haddock were well balanced and encased in a perfectly crisp coating, the lemon butter was slightly cloying.

Onglet and chips was a hit. The expertly cooked steak was packed with the deep flavour that you expect from this ‘taste over texture’ cut. The menu explains that the meat is supplied by the excellent H.G Walter in Baron’s Court, ‘hideously local’. Chips were golden, crunchy and piping hot. The accompanying béarnaise, picked from a choice of sauces, was rich and thick with fresh herbs. A little peppery salad was the perfect understated accompaniment.

For our next course we buried the hatchet, forgoing the chocolate fondant and the seasonal fruit clafoutis, and returned to the sharing choices. The generous dish of Ginger Bread and Butter pudding (which again our waitress egged us on to devour) was delicious. More like a baked ginger cake, it was the kind of pudding you just keep eating. Creamy vanilla ice cream was served in kitsch little pots. The individual portioning of this component of the meal was helpful, successfully side stepping the passive aggressive spoon clashes that a shared ice-cream can result in. The presentation of this course was particularly appealing and the overall styling of the food was well thought out throughout the meal.

The wine at My Dining Room was well priced, a good selection available by the glass, 500ml carafe or bottle. We went for the bottle, a £16.50 bottle of South African Chenin Blanc. Fruity but very dry and unwooded it was particularly good with the fishcakes but enough of an all rounder to wash down everything we ordered. A fresh mint tea in a stylish little pot was delicately fresh and the perfect digestive. A carafe of tap water and lemon was topped up by the eager staff, who were also on hand to encourage you to eat as much as you can manage from the sharing dishes, this is helpful if you suffer from an excess of British restraint and adds to the ‘home from home’ atmosphere. The service was very good, friendly, attentive yet informal, which I suppose you would expect for 12.5%.

In terms of value for money, if you go for one of the home dishes at My Dining Room you are onto a winner and the al la carte is fairly priced. The food was very good; the idea of sharing plates a quirky addition that make it worth seeking out. This style of eating is especially suited to occasions when you want to encourage group interaction; birthdays, reunions, mandatory work outings; anytime when you might be stuck for conversation or need to build camaraderie.

By Foodepedia21 May 2010Restaurant Reviews