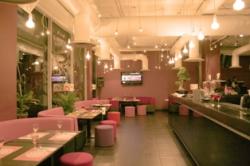 Having attended a reception at Piya Piya and tasted some very good nibbles that were being handed around, we decided to go back there for a meal so that we could sample the selection from the full menu. Close to Old Street station and about a five minute walk from Moorgate station, Piya Piya occupies a fairly large space in the Oliver’s Yard complex. With a high ceiling and an exposed air conditioning pipe network it has an industrial feel about it, but this is softened by the bold decor.

As we were seated we were asked if we wanted to order some prawn crackers, which we did, a bowl of good tasty and crunchy crackers appeared as did the Kleine Zalze Chenin Blanc that we had selected to have with our meal. For starters we chose three dishes to share, the sa-tay chicken which was comprised of skewers of tender meat, accompanied by a small dish of satay sauce. The chunky bits of peanut in the sauce, gave it a nice texture that went well with the chicken. The dim sum was a clutch of tasty little morsels with a sweet and hot dipping sauce and the lok chin tod, crispy coated minced chicken balls were nicely seasoned, again with a slight sweetness and herb flavours coming through. These were three good tasty dishes to set out juices rolling. The Chenin Blanc had a good fruitiness that we thought worked very well with the spicy flavours we were encountering.

Moving on to mains, the kang mussaman, beef peanut butter curry, had a lovely thick, velvety texture with good but not overwhelming peanut flavour, this carrying its cargo of thinly sliced beef that had some bite and chunks of pumpkin and potato that added a different dimension and body to the dish. The kai tod gratiam prik Thai, stir fried chicken with garlic and peppers, was another tasty dish, the tender chicken pieces and peppers in a not overly garlicky, but good sauce. With these we had the pad Thai noodles, with bean sprouts, prawns with crushed peanuts. The noodles, a little al dente, had good flavour from the sauce that coated them. The prawns, tails on, were cooked perfectly, remaining tender and juicy. The three dishes, although quite different were each tasty in their own right but they worked well with each other.

Service was good, attentive throughout the meal, we were well looked after. With a reasonable wine list that starts at £14.50 a bottle and an interesting array of dishes, Piya Piya has a lot to offer.