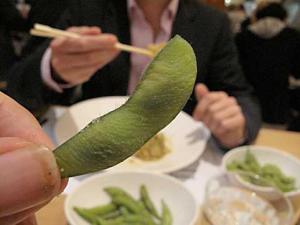 Somehow I missed the golden age of Wagamama. A time when everyone was ‘queuing down the street!’ the manager tells me, wistfully recalling early days in the 1990’s. I must have been somewhere else I suppose, possibly Covent Garden, because this is the first time I have ever been inside one.

Oh well probably for the best really as I hate queuing for my food as it reminds me of being in my University canteen, which is odd because sitting downstairs in the curiously upside down Wagamama in Lexington Street (the kitchen is upstairs), that’s what I’m being unavoidable reminded of. I can’t help the nagging suspicion that I am once again late for my seminar on TS Eliot, a poet on whom my redbrick university was unaccountably keen and on whom quite understandably I wasn’t.

It’s all long benches, white walls and designer institution décor down here. It could also be the canteen in a modern prison, or in Microsoft headquarters, which I hear is much the same thing, especially as here in Soho the customers’ fashion statements are mostly black, black and a bit of added black just for emphasis.

All this hipness makes J loosen his tie and try to pretend he isn’t wearing a suit. I tell him not to worry, people will take us to be a Mac designer and account handler from a nearby ad agency, my jeans clearly marking me out as the ‘creative’ half. ‘But I’m the one who went to Art College!” he complains bitterly, fighting with his knot.

We’ve been lured down here by the new Xmas and winter menu, although when it comes to ordering our lunch a slight language breakdown between us and the Eastern European chap serving us means we only get to order the items from the winter menu.

One of Wagamama’s endearing, or infuriating, quirks depending on how you look at it, is that dishes do not come together, or indeed in any particular order. So the edamame beans with salt we ordered to keep us busy while we waited, didn’t actually arrive until we had nearly finished. They are good though, you simply close your lips over the pod and draw back using slight teeth pressure to squeeze the beans into your mouth, a perfect helping of salt comes off the pod with them. Highly addictive things and apparently there’s a chilli option too. 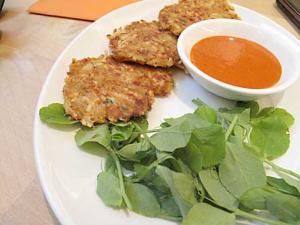 But we are getting ahead of ourselves, first to come was J’s wagamama kedgeree – a blend of sticky white rice with naturally smoked haddock, spring onions and a soft boiled egg. Very good, he said, very tasty, and plenty of it too. With this he was drinking apple and ginger juice, which I had a sip of and it equalled the ones I make myself in the mornings, that’s when I can be bothered to face cleaning the juicer of course.

Crab cakes were thin and falling apart, and that’s a good thing as too many restaurant crab cakes can be used as hockey pucks. The sauce served with them was a vibrant orange colour suitable for painting Air Sea Rescue helicopters with, but it was still a bit too mild to winch the cakes up into flavour heaven.

My chu chee chicken curry a blend of stir fried chicken and butternut squash in a chu chee curry sauce with thai basil, peppers, mangetout and courgettes, served with steamed rice was really spot on. The peppers well braised to release their innate sweetness, the butternut squash tasting festively of roast chestnuts. The chicken pieces could have been smaller, chopsticks don’t make the best knives, but that’s all I had to complain about. Even the rice had flavour, and you can’t often say that.

So as we went upstairs and peered at the chefs working behind their glass screen (please do not feed the chefs) we felt that Wagamama still has the edge when it comes to fast food that is decent food. The winning formula works, so why mess with it? It may look like a University canteen but it’s more than a degree better