If it were ever decided to add a tenth circle to the Inferno, then surely it would be in the bowels of Piccadilly. More precisely, the soul sinking fathomage of the Trocadero.

There is a place, a themed-hole, so bent on parent and tourist extortion that the staff hide behind trees and dress in camouflage. Where guests are disorientated, thrown into the belly of the beast. A mechanical zoo run by accountants.

The Rainforest Cafe is a themed restaurant capitalising on local tourism and senseless parents. The first location opened in the Mall of America in Minnesota in 1994, cashing in on the success of other themed money-spinners such as Planet Hollywood, Hard Rock Café, Bubba Gump Shrimp Company, and The Fashion Café Chain (now vanished completely).

To date there are 27 restaurants in the United States, three in Mexico, two in Canada, one each in Dubai, Japan, and France, and… *holds breath* one (that’s one too many) in the Uk.

And it’s here, in Piccadilly, below ground and covered by dusty, plastic foliage and plant growth; a fiber-optic star ceiling, and animatronic animals, where Hell has formed. You won’t notice at first, it’s covered by automated water sprinklers and synchronised lights. But just when you begin to realise that the children, in fact, aren’t having a good time, and the prices push to even the best Michelin standards, you’re concentration breaks, and thought is interrupted by one of two things:

Every half an hour a simulated thunderstorm occurs. Noises exaggerate rain and there are flashes of light. High-powered subwoofers for lightning and thunder rumble and scare the living daylights out of those under five. Everyone else is left traumatised. Or, a man dressed as a fro 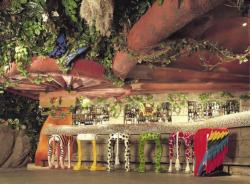 g arrives at your table, waving and poking his webbed hands at you. His name is Cha Cha and he’s accompanied by a smiley, khaki-clad waitress, and between them they attempt conversation with the table’s children. You gawp at the utter craziness and forget that you’ve just ordered a plate of junk food for £17.50. The prices are brutal.

The food is pompous, not in the haute cuisine sense, it’s just completely, totally, cleverly aware of its theme-park status and child catchment area. Familiar junk food plates are the same as every other theme restaurant menu, and are given a new guise with make-over names: Meatball Mambo (meatballs and spaghetti), Mojo Bones (ribs), and ‘Volcanic” Cobb Salad. As AA Gill commented on his horror visit: ‘It’s hamburger and pasta caught between a Hard Rock and a hard place.”

Here, it’s not the animals that attack you, but the accountants and owners behind the scenes. I know, I know, ‘it’s for the kids’ you’ll say. But looking around they all seem to be playing with their food instead of eating it, or cuddling up to a family member, terrified by the tropical rainstorm. They look almost as depressed as the adults. Sets of families fill the jungle dungeon, all waiting for it to end.

It calls for a time of family unity. To pull together, sing Happy Birthday to a nine-year-old, hand over the American Express, phone the bank manager to apologise, then bolt (after picking up a stuffed Panda (something you won’t find in a tropical jungle) and a sticky frog from the ‘gotcha’ shop). Not even David Attenborough would visit this jungle. He couldn’t afford to. Who can?

Ambience rules in the swamps of Piccadilly over food, drink, crayons, and the pleasures of a child. Would you take a five-year-old into the real jungle? So why take them into a simulation. An over-simulation. Bamboozled by ear-bleeding subwoofers and four-foot butterflies nailed to the walls.

And like any dragging adventure, the happiest emotion is when the cusp is in sight, so desserts hold a particular welcome. They mark a full-stop. Sparkling Volcano (strawberry and vanilla ice-cream with a chocolate brownie, banana, whipped cream, marshmallow, cherry, caramel, and chocolate sauce… with a sparkler) is as superfluous and needless as it sounds, or there’s Iggy’s ice-cream (three combination scoops). There’s a Belgium Waffle that’s just blah, and oh, a birthday cake for £24.00. And of course, you can’t bring your own.

There are many horrid aspects to the Rainforest Cafe; gastronomy output and the wave of petrified children’s faces rank among the highest. Accountants behind the scenes are smiling while children are crying. But like the animatronic animals, the mechanics will continue to creak; unknowing parents and tourists will book in advance, and children will crave the experience in their Tarzan ambition, leaving despondent with a cuddly under their arm. These places do exist. Thankfully underground, below our feet, and tucked away. A tenth circle of the Inferno has emerged, and it’s in the bowels of Piccadilly.