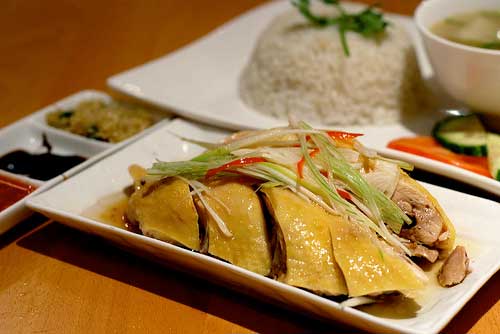 Hmmm, my seafood noodles seem to have a deeper flavour than usual. ‘Pork fat!’ explains the cheerful waitress, ‘we fry in pork fat.’ Well that’s one mystery solved and my arteries let out a small yelp of protest, drowned only by my taste buds shouting for more.

Rasa Sayang quietly prides itself on delivering as authentic a Malaysian/Singaporean experience as possible hence the pig fat. That and its reasonable prices would explain why so many people lunching here seem to be from that part of the world, along with some rather intense backpacker types whose skill at plying their chopsticks suggest gap year experience in the Far East.

Formica tables and large pictures of Kuala Lumpur on the wall give this place the feel of a canteen and the no frills functionality extends to a short menu, which makes good use of pictures to help you choose. This way you can avoid doing what I once did and mistakenly order up chicken’s feet, something I still have bad dreams about.

I know what satays are without a picture prompt of course, but these are flatter, tastier and not smothered in a satay sauce which, too often, is just sweet peanut butter. Little cubes of compressed rice and of cucumber make a simple accompaniment for these juicy mouthfuls. The Gado Gado is rather goodo goodo, the fried bean curd pleasingly chewy and the vegetables crunchy and fresh. I even eat the hard-boiled egg, which normally I view with suspicion. This one has a bright yellow yolk, which suggests it may have been sourced from a decent egg supplier.

Sambal prawns are a bit watery, possibly from frozen, but are a decent size and flavour. The okra with them is the star though, for once it’s not overcooked and slimy and for once I start to see what people like in this vegetable. I also like the Beef Rendang a lot. This is a curry that can only be made very slowly with the beef reduced almost to separate fibres and the sauce wholly amalgamated. For that reason in many restaurants in Malaysia the Rendang that has been cooking the longest is also the most expensive. The waft of cinnamon here is just right, a warming dish for all the senses with a mass of complicated flavours revealing themselves with each mouthful. Rasa Sayang also serves the more rarely seen Hainanese chicken rice – poached chicken with a trio of sauces that I could see was a popular choice with those in the know,

To drink, there was Teh Tarik, a frothy tea made with condensed milk, an incredibly sweet concoction that is also rather addictive as that overt sweetness counters chilli well. For desserts some unusual broths came out including Eight Treasures, a dessert and also a medicine, usually made with white fungus, ginkgo nuts, lotus seeds, honey dates, red dates and sea coconut all served in a chrysanthemum and sugar-based soup. I didn’t check list the ingredients but I reckon that most were all in there present and correct.

With bills that come in lower than a Peking Duck on final approach and a laudable focus on authenticity, Rasa Sayang is a great ambassador for its cuisine and the ideal place for a fast lunch or a more leisurely dinner. Dieters beware of the pork fat though, it’s easy to make a pig of yourself.