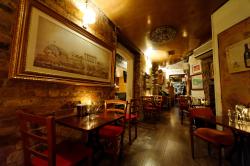 A decent French restaurant in London is not an easy ask, Blanchette being one of my favourites and an exception to this rule. Finding a truly decent restaurant to relax in full stop in London’s Covent Garden is an even tougher call. One that most have us have searched for, elbowing our way through the slow moving foot traffic of post-work shoppers and diners; hunting for a pre-theatre menu that isn’t steak frites and doesn’t require you to bolt your food down before running full pelt to the theatre so you won’t have to be let in after the first song with all the other naughty late comers.

Thank goodness then for Le Garrick. A tiny place that, from the outside, looks like nothing more that a few, quaintly Parisien outside tables but, on closer inspection, as you descend the narrow staircase to the yellow-hued restaurant below, reveals something quite extraordinary: a true culinary home from home.

Run by the ridiculously convivial master of the house Charles and his wife Dominika, as soon as you’ve wedged yourself into one of the bijoux tables you’d be forgiven for thinking that you were about to tuck into a meal cooked by Charles in his very own home. The beautifully-relaxed, lounge sentiment extends to the menu too, which is influenced by Charles’ upbringing in Toulouse, Burgundy and the basque country and is packed with by the flavours of his own mÃƒÂ¨re’s cooking.

The food here is free of that specific brand of pretentiousness you can sometimes associate with typically French cuisine (although, I’ll readily admit that when you’re a nation that’s managed to perfect the devilishly difficult medium of pastry then you do get free bragging rights) and instead it’s rustic, home cooked yet refined. The sort of menu that makes you salivate before you’ve even ordered. In short, it’s the kind of food you genuinely want to eat.

The starters went on for ever, like a living, breathing and cellulite-inducing version of the Beauty and the Beast Be Our Guest food parade; although, unlike the eponymous heroine in Disney’s tale, I definitely indulged in more than a finger swipe of mousse or a sip of tea in this sitting.

It all began with escargot, each fat, delicate, perfectly-cooked little snail swimming in its own pool of golden, garlicky butter. These gleaming darlings were quickly followed by tender moules mariniere, wooden boards of peppery, pungent charcuterie and two stand out dishes: a tender, softly-spiced bowl of calamari with an unexpected hit of ginger in its sticky gravy and an oven-baked vacherin. This little beauty was a golden, fat round that exploded into gooey bliss at the first prod of a piece of burnished baguette and left me with my mouth glued shut, masticating furiously and nodding in gelatinous, gloriously gluttinous approval. 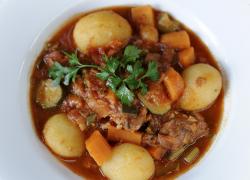 But then again, this is the sort of simple, effective flavouring and dedication to sourcing exceptional ingredients that characterises every dish here: it’s all been lovingly selected, prepared, basted, marinated, sauced and coddled like a favourite child.

And it has the stories to prove it, from the calamari, which Charles explained came from a town in southern France where the white walls of the houses are stained red with blood as the squids are pinned up to dry, to the wine we were knocking back with the starter, which Charles and Dominika hand sourced from Chateau L’Ermitage in Saint-Gilles.

The mains arrived in huge plates and simmering bowls: cassoulet melting with goose fat-covered beans, hunks of ham and thick, blackened sausages; a boeuf bourguignon heady with wine, onion and salty bacon that tasted like it had been marinating for about a month and a duck a l’orange, which reminded me just why this dish is such a classic.

The duck in question nearly ruined it all for me with a mouthful of flabby skin, but I was appeased by the tangy richness of the sauce and the side of mash potato, which was so creamy it should come with its own health warning.

As I was waiting for dessert – a platter of sinfully dark chocolate mousse, a lip smackingly-sharp tarte au citron and a pile of glossy, golden madeleines that dissolved on eating like a puff of lemon-scented cloud – I tried to put my finger on what it was about this place that I loved so much. As I was weighing up the decor against the food and the hospitality, I was interrupted by the waitress, who beamed at me and put her hand on my arm before softly pushing against me, leaning on my shoulder to clear the ravaged bread baskets and stray plates.

This is the sort of intrusive, assumed intimacy in restaurants that usually annoys me, but here it was strangely warm and friendly and for once, I found that I didn’t mind. And that’s exactly what I think I loved about Le Garrick: the atmosphere of sheer, unavoidable charm that pervades in this little, low-ceilinged and dimly-lit restaurant. 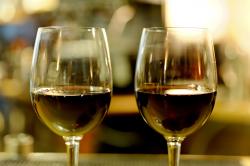 This isn’t a hip, young, shiny thing that changes it’s menu each week and splatters it with buzz words like fusion, home-brewed or homemade (it’s a restaurant…it should be bloody homemade); there’s nothing aerated or foamed or deconstructed on this menu and if you’re on any sort of diet that restricts carbs or fat or meat then you should steer clear because what this place does and does well is hearty, heavy, decadent French cookery.

When I finally made it to the door, flushed and dewy-eyed; drunk on fat rich food, red wine and the bon humour of it all; out into the cold and the traffic and the passing, casually stabbing elbows of Covent Garden, the Gallic bubble had well and truly burst. Luckily though, its memory has remained, neatly secreted into the special brainspace reserved for truly memorable meals.