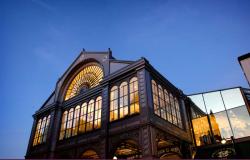 It’s been at least five years since I went to Roast. The pace of openings since then has become so fast, so furious, the keen diner need never go to the same place twice. Miss one restaurant’s hyped up, hysterical launch? Don’t worry there’ll be three more along in a minute.

Since my last visit the area around Roast has evolved. Massive building works have changed much of the area’s character but the approach to the restaurant’s lift, past the market shutting for the night, the drifting cabbage leaves and the spray from the pressure hoses cleaning down the wet fish stall, is still oddly romantic.

I remember the lift, I remember there was always a bit of a wait for it. Why? It only serves one floor after all. The lift  finally arrives and it has a dwarf in it, no not a dwarf but one of those middle-class small boys with too-long, too much hair. He’s been playing about, no doubt to the benign amusement of his parents. I get in a light blow to his head while reaching for the buttons and return his aggrieved look with a cheery smile. No doubt he’ll tell mummy and daddy about how he met an evil Tory in the lift.

Upstairs the staff have radio headsets, which is a bit clubby but then it is pretty noisy. A singer in the bar is straining to make herself heard over the tumultuous roar of Friday night office workers off the leash and on the lash. Up back where the famous old glass bits of  Covent Garden Opera House create the main dining area, it’s thankfully a lot quieter but equally busy.

For a restaurant that has no gimmick, no star chef, it’s doing rather good business. It’s not cheap either, in fact a glance at the menu reveals serious prices at play. It’s a menu that ticks boxes, something for everyone with ingredients sourced from the UK, even down to the snails and chorizo

Pittenweem Scotch egg is a mystery to me, I have no idea what a Pittenweem is and not having the restaurant critics’ portable expert (an iPhone) I can’t find out, but when it arrives it’s clearly fishy. It’s good, the egg inside perfectly soft boiled and the caper mayonnaise serves two functions – some astringency on the palate and as glue to stop the dish rolling off the plate like a loose cannon ball. I’d have liked the exterior crispier though to contrast with that soft centre. 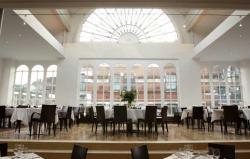 P has Isle of Wight sweetcorn and chilli fritters with Bath Pig chorizo and baby squid and likes it more than I think I would have done as it looks a bit messy. The squid is cooked well, but the fritters are rather damp and the chorizo, while good, is not as tasty as Spanish chorizo. It must be down to the pigs I suppose

I have Plymouth razor clams with a chorizo crust because I do like razor clams even when they are £23.75 for three. Ouch. They are extremely good clams, sweet and nutty and plump. The crust is not perfect though; soggy breadcrumbs dotted with chorizo, it would have been so much better with far fewer crumbs and a lot longer under a hotter grill.

However P is very happy with her Wild Rabbit and New Forest cider piewith Herefordshire snails. I try a bit and I agree, the flavours are all in line and the flaky pastry carries them well. I bite on a small bone and she gets several. This is always a problem with rabbit, but when you’re making pies it’s obligatory to take a bit more care because people don’t expect the sudden heart-stopping crunch and thought of the dentist’s bill.

And so to pud, an Eton mess for P, which must be one of the easiest desserts to make ever, but that doesn’t make it any less enjoyable. Fresh soft fruit, meringue and cream what’s not to like? My Sticky date pudding with toffee sauce and Neal’s Yard crÃƒÂ¨me fraiche didn’t taste much of date, more were needed, but the sauce and crÃƒÂ¨me fraiche were suitably rich and guilt-inducing.

Roast certainly charges more for dishes than I think it probably should, but the filled tables show that there are plenty of people out there happy to pay it. The food of a kind of Hixian type, which is to say ideal for business lunches and client entertaining, is mostly done to a decent standard and the room is buzzy and bright. No one is taking pictures of their food, which suggests the Roast demographic is settled, not fad led, over 25 year olds and with proper jobs. There’s still a heating problem, sudden washes of hot air and then serious chill breezes, but these have become almost part of the folklore of the place.

You don’t last this long in London without delivering and Roast is soldiering on solidly and getting tables filled doing so. The location is still lovely and unique and while the food breaks no boundaries, there’s nothing wrong with that.