I have a friend with a Thai wife; lovely lady cooks fantastic food but has to be physically restrained from tipping platefuls of chillies into everything. Even on half power, her food can still have you’seeing through time’, as Lisa Simpson once said after eating one of Apu’s curries.

Rosa’s Thai seem a bit afraid of the chilli though, my crispy squid has one small piece of semi dried chilli which itself seems to be dead as far as heat goes. This is a shame as the squid itself, while not being all that crispy, has come enrobed in a grease free batter and is tender and tasty. Some little chips of fresh chili would have made a big difference to play against the sweet sauce that comes on the side.

The restaurant has been designered in the way that Dishoom has been designered. Nothing in it is more than a few months old and it is unashamedly kitted out in a vernacular you might call’fast food ironic’ – wooden tables and benches, American diner style lights etc. It’s a place designed for eating and going, it urges you not to linger, it shoos you off to that cinema or back to the office. In short, it is bang on trend for the under 30s of London.

I like the look, despite being well out of the demographic. It feels clean and crisp, crisper than that squid anyway. We share some satays perhaps a clichÃƒÂ© choice but I always enjoy satays. These are chicken, moist inside but a bit lacking in what I think is the best bit, the burny bits on the outside. You only really get that with a charcoal grill though, which of course not every restaurant can install. The peanut sauce is mildly spicy but I don’t pick up any lemongrass notes from the marinade.

Pad Thai is something that fans will argue over forever; what’s right and what’s wrong. Perhaps there is no’right’ only what personal taste prefers. Personally I prefer flat rice noodles in mine as I like the way the semi-transparent nature of the noodle lightens the dish and gives a slight chewiness. I also think the flat noodles are able to pick up and carry the sauce better and in a more balanced way. Rosa seems to prefer the thinner noodle though, giving the dish a Chinese look and making it a bit stodgier to eat.

I have the chicken version and while it’s tasty enough it doesn’t have a wow factor. I can’t pick up the sour notes of tamarind, not obligatory but fairly traditional, and the chilli comes supplied as a pile of dried chillies on the side of the plate to add yourself. Understandable perhaps so as to give diners a choice, but I’d have preferred it stirred in. The peanut element also came on the side, perhaps in case anyone has an allergy.

A plastic milk bottle rack supplies chilli oil should you want it, and I do. There’s a reasonably generous amount of chicken in with the noodles and overall, despite being a bit overly sticky, it’s a reasonable plateful but with muted flavours and not enough lime. 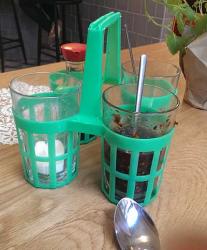 The house green curry is okay, but the sauce a little thin. Again fire is missing from it, but the rice is well cooked. Best dish is the aubergine one; yellow bean sauce, chilli, garlic, soya sauce and sweet basil all present and correct and the aubergine slippery and gorgeous. This is from the evening menu which on this example, perhaps offers more excitement than the pared down lunch menu we ate.

I’m told the food in the East London branch is very good, so perhaps the Soho one has had some tweaks for the market. Overall I felt the meal lacked verve, reined in and not delivering the zap and pow I expected. Perhaps I’ve been spoilt by my friend’s wife’s cooking, but Rosa’s Thai Cafe, while delivering a perfectly okay and reasonably priced lunch, didn’t set my world, or anything else, on fire.