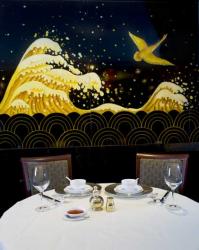 Tom Parker Bowles was sat a few tables down from us at Royal China Queensway. That’s the sort of info I’m supposed to tweet live and ‘as it happens’, but as it happens I think tweeting in a restaurant is wrong at best and rude at worst. And anyway, isn’t T P-B entitled to a bit of privacy?

What is or isn’t rude is subjective but it is relevant because Royal China was getting a bit notorious for its ‘rude’ staff. Of course anyone that’s ever eaten in a Hong Kong restaurant will know that Chinese staff aren’t so much rude as ruthlessly efficient and deadly serious. They aren’t about to enquire after your health or your family; they assume you want speed of service and no mucking about. They don’t smile because it’s no joke. A Chinese restaurant in London is usually no different, so get over it Mr Westerner.

After 20 years Royal China has had itself a makeover. The walls have been kitted out with new black and gold murals, the ceiling has been raised, they’ve flashed up the bar and private dining area and hidden the kitchen away. And the staff have been refurbed too. All the ones we met had a smile and a friendly air about them and it didn’t seem forced. They were quick to refresh our crockery in the face of my messy eating and swift to top up the tea. And that’s about all I want. I certainly don’t want the American ‘Hi my name is Greg and I’ll just perch my resting actor’s buttocks on the table next to you and simper!’ style of serving.

For twenty years Royal China has been all about traditional style Dim Sum, served, as is traditional, only up until 3 p.m. On Sundays queues of Chinese families have become the stuff of legend as they wait their turn to tuck in. Unlike them I’m no dim sum expert so when I order I rely heavily on the pictures. Royal China has two dim sum picture menus, one standard and one with some posher specials to lure you from your comfort zone but I’ll tell you one thing, I’ll never eat the chickens’ feet.

Six or seven dim sums normally meet the needs of two people but it’s best to go mob handed if you really want to get a lot of choice on the table. Many dim sums come in threes, as the number four sounds like ‘death’ in Cantonese, so couples sharing can get a bit fractious. We loaded up on black bean spare ribs, fried turnip paste ( I know, I know but it is delicious, honestly), cheung fun, those slippery white parcels of prawns, BBQ Pork Buns, steamed beef balls, fried prawn dumpling with coriander and a couple of others whose names escape me.

They all came extremely hot, which is a good thing as you’re supposed to take leisurely enjoyment of your tea with dim sum and cold dim sums are less than pleasant. They all came at a reasonable pace too, neither too fast nor too slow and the steamers never managed to overflow the table.

Taste wise, no complaints, the chili-spiked black bean spare ribs were the usual gelatinous tussle but that’s where the flavour is. The turnip cake was as good as any I’ve had and nothing disappointed, although I had forgotten how beef balls don’t really do it for me. The BBQ pork buns were well textured in their usual peculiar way; some can be like forcing down savoury candy floss but these were spot on, if a little light on filling.

No dim sum cart trundling around here, so we got our waiter back to order some truly excellent wobbly egg tarts and sesame balls. The latter with their filling of red bean paste are very popular around Chinese New Year and these were perfectly fried.

Price wise Royal China costs no more than the average, tattier, places in Chinatown and the number of Chinese people eating showed that its popularity hasn’t been affected by its new look and style. The room is big, not intimate but then it’s a machine for eating, which is just as it should be.

There seems no reason why Royal China can’t do another twenty years just as comfortably as it has the last, with succeeding generations of Chinese families making it their weekend treat. And if Tom P-B wanted to bring his family round I reckon the friendly waiters wouldn’t turn an heir (sic).