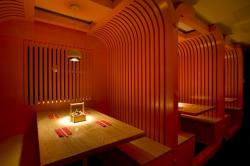 Nestled somewhere between the bustle of China town, the excitement of the theatre district and the male-oriented shops and peep shows of the dodgy part of town, lies Satsuma. A long time favourite with the media types who frequent the area, Satsuma serves popular Japanese cuisine in their newly refurbished digs on Wardour St.

Food-wise, Sastuma delivers a pretty decent standard of Japanese fare. The obligatory edamame graced our table as we absorbed the very orange surroundings that would make Buddha feel right at home. It took me most of the night to realise that the table on our left was not a mirror but an empty booth. When two ladies were seated in the mirror-image pod it was with embarrassed shock that I realised the woman I could see at my left was not me.

Gyoza for me is a good yard stick for any Japanese restaurant. I really love them and yet they’re rarely done well. The gyoza at Satsuma were pretty good; tender casing, tasty filling and a crispy base to remind us that these pot stickers were treated to more than just a once around in the microwave. The tempura was good but when is tempura ever not good?

My partner splashed out on the rather pricey Ocean Bento, which outstripped everything else in terms of cost on the otherwise well-priced menu, and while it did have a few pieces of sashimi and seafood sushi, it did seem a little over priced.

I ordered the katsu and curry, and in the name of research, a side of yakisoba noodles.  Not surprisingly the curry is their best seller but for my money I’d rather eat a more character-filled curry at an Indian restaurant. The noodles were lovely and made me regret not ordering a full plate and perhaps trying the ramen.

Once populated with space-age orange booths, management decided to over haul the space yet again with the more mingle-friendly seating plan of community tables. So now, along with the help of the floor length front window, it’s easier than ever to see and be seen at the Soho venue.

With no room or inclination for Japanese themed ices, the waiter insisted we try the plum wine. I’m not a fan of sake and so it was with caution that I agreed to try it.  As it turns out, plum wine is a winner and unlike anything else I’ve ever tasted. That, and the unusual tea served with our meal; a concoction of green tea and a brown rice infusion, were the highlights of the evening. I’ve never had such interesting beverages with a meal before and it really did add something to the experience.

If you’ve got a hankering for some panko and people watching, head over to Satsumas after 8pm, when the place is heaving with folks out for a gyoza and a good time. And if you’re not a fan of forced social interaction, fear not, they still have plenty of booths downstairs for those prefer to canoodle away from the prying eyes of Soho.