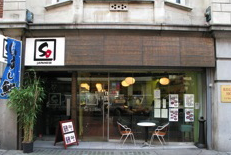 So, what can I tell you about So? It’s a Japanese fusion restaurant hidden in the snaking back alleys near Piccadilly Circus, almost entirely frequented by Japanese people the night we visited and pretty impressive. Being voted the UK’s Favourite Japanese in the Eat-Japan Dining Awards 2009 by Japanese residents in London must prove something. But what about the L & A awards 2011?

So’s head chef Kaoru Yamamoto spent three years as head chef at Hama which he left in 1977 before training as a chef in France. He subsequently returned to Japan and dual training is evident in So’s menu, for instance, in the foie gras nigiri sushi.

Not a fan of sushi, I thought I’d give it another chance at this esteemed gaff and was more than satisfied with the experience. So is very minimalist dark wood in its décor and has a lively sushi bar upstairs. We were shown downstairs first, a bit dour, and it took a little explaining to be allowed a table where the life was.

Finally seated, we started. First we had some delicious lotus root chips served in a twist of tissue paper with a roasted seaweed mayonnaise, very delicate. The food came on arresting plates which looked like melted chocolate candle wax. But the extensive menu and its possible combinations were confusing. Did I want a nigiri and roll platter, a sushi and sashimi platter, individual sushi, tempura, rolls, a combo, a la carte, hell in a handcart, carte blanche?

Yet once L had patiently guided me through her favourite options, it began to make more sense. We just ordered a medley. The hijiki seaweed and edamame salad dressed in soy sauce and mirin was a light, fresh and beautifully-coloured nest of purple and green fronds. The soft-textured grilled Iberico pork marinated in miso excelled in its deep, stickysweet plumminess and was rare on the inside. A treat. As was the sliced, grilled aubergine with red miso paste which were lovely goo.

And we tried the sushi – eel, salmon and seabass nigiri – which was taut and slightly restored my faith in the genre, as did the spicy tuna rolls dolloped with avocado sauce. The soft shell crab was a disappointment though; Rather than an organic whole, there were a few stringy legs with no meat, fried in a heavy batter.

To accompany all this, despite the inviting Saki menu, we did as the other diners and had wine, in our case, a crisp and grassy 07 Chile Gran Hacienda Chardonnay from the Casablanca Valley. Both L and I agreed we didn’t have the usual tummy bloat after a leisurely meal out and while prices are not cheap, they’re affordable and worth it for the discerning customer. So is definitely not So-So, agreed.