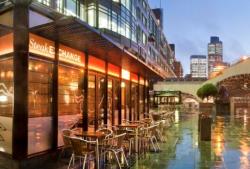 Some restaurants adopt the Ronseal approach, you know, they do exactly what they say on the tin. Dinner, for example, serves dinner. Pizza Express fleeces you for pizza served very quickly. Now, for all you lucky city people, there’s The Steak Exchange, serving steak in Exchange Square.

This isn’t any ordinary steak, oh no, far from it, how dare you think such a thing. This steak is sourced from Royal Warrant holder, Donald Russell. This steak, my good friends, is fit for Queenie, the corgis and all the family – well, maybe one red-headed exception, but they’re not coming to the wedding so it doesn’t matter.

I like playing lunch tennis with old school mates, taking it in turns to choose a venue and foot the bill. One of my best opponents is Nev, a former classmate that’s enjoyed an impressive stint in the Big Smoke. He’s managed to put a few decent places on my radar and acknowledged many of my offerings as venues he’s already visited. Time to get my own back, my victory is in your hands Steak Exchange.

I arrive early to take a look around the place. The décor is heavily dominated by dark wood and matte silver metal – I can’t help thinking it’s done this way to replicate the colour combination of steak and cutlery, then again, I am hungry and ploughing through a nice bottle of Meantime London Lager.

Nev arrives and within ten minutes I realise I’ve broken two unwritten rules. Firstly, Nev rocks up in a very relaxed polo shirt and jumper combo, whereas muggings here has completely forgotten the relaxed ‘no tie’ Friday rule and got suited and booted – even the local boys aren’t sporting one. Damn. I can feel them sniggering at me while they chomp on their money sandwiches.

The next blunder is ordering the same starter. Yes, ok, it’s not a cardinal sin, I’m not going to have a no-fly zone sanctioned upon me, but in certain circles it’s not the done thing. We both opt for squid with a lime and chilli dressing. There’s a tiny heat jab to the nose followed by a solid citrus uppercut. Delicate and light, my only spat is with the quantity – but you’re always going to get that with this post-code.

The restaurant has a theatrical flagship of a main course – an 800g sirloin steak for two, cooked on the bone and brought to the table to be carved. Sounds tasty already and I’m sure it would have been, yet the prospect of stomaching 400g of beef was too much for Nev. I know, what a complete wet. Disappointing me in this way calls for one thing and that is to rat him out as the guy who liberated all the maggots in biology class, I hope Miss F reads this!

Instead we choose individual steaks. Nev gets his order in first and selects Ribeye – drat! That’s what I was going to order, I can’t just copy his choices, better think fast, ‘I’ll have the rib of beef, please,” (whew, good save). The steaks are served on wooden boards, which I don’t mind as it’s nice presentation, but I prefer a hot plate as it helps to keep the meat warm.

My rib of beef is cooked very well, a nice seared outer crunchy crust with a deep pink interior. I’ve taken a side of chips and another of creamed spinach that combine with the steak perfectly. A touch of béarnaise sauce here and there doesn’t do a lot though and isn’t needed with meat of this calibre. Succulent, great flavour, just got a little cold towards the final stages of my 400g of beef.

Nev is beaten, he can’t manage a desert. I select a raspberry cheesecake to see off my opponent. Good effort, Marcus. You deserve this soft, creamy cheesecake. It’s thicker than a redneck and sweeter than a kitten catching snowflakes.

Nev grabs a coffee as I come to the end of my gorging. I’m feeling rather content until he checks his watch and declares that he better get back to the office. Then it hits me, I’ve got more work before the day is over and I’m more bloated than a pregnant sumo wrestler. I guess that’s error number three for me – but at least The Steak Exchange has managed to let me win this round of lunch tennis. We’re both very pleased, it’s a really good shout for lunch in the city and we’ll both be going back.